Children in Immigrant Families More Likely to be Sedentary: Study 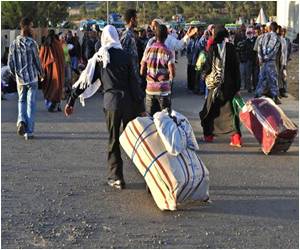 Immigrant children from all racial and ethnic backgrounds are more likely to be sedentary than U.S.-born white children, suggests a new study by sociologists at Rice University.

The researchers said their findings should remind pediatricians and parents of children in immigrant families to encourage physical activity.


The study, "Neighborhood Context and Immigrant Children's Physical Activity," will appear in the August edition of Social Science and Medicine. The study included data from the Early Childhood Longitudinal Study, which surveyed 17,510 participants with kindergarteners on issues affecting child development between 1998 and 1999.
Advertisement
The study also found that U.S.-born white children have higher rates of physical activity than minority children born in the U.S., although the gap is smaller than the one that exists with children of immigrants. U.S.-born black children are 1.35 times as likely to have lower levels of physical activity, U.S.-born Hispanic children are 1.23 times as likely and U.S.-born children of unspecified ethnicity are 1.52 times as likely.

"Children in immigrant families are at particular risk for low levels of physical activity, which we were unable to explain with a host of factors relating to family and neighborhood characteristics," said Rachel Kimbro, an associate professor of sociology at Rice and the study's co-author.

Mackenzie Brewer, a doctoral student in sociology at Rice University and the study's lead author, said that in terms of health status in the U.S., it is important to understand the health behaviors of children in immigrant families.

"These children comprise a growing population of American youth, and failing to address the low levels of physical activity among this group could have important long-term health consequences as this population transitions into adolescence and adulthood," Brewer said.

The authors hope the study will promote additional research on how physical activity of children varies across racial and ethnic backgrounds.

Lower Risk of Cerebral Palsy in Babies Born in Canada to Immigrant Mothers: Study
Significantly lower rates of cerebral palsy is seen in babies born to mothers who immigrated to ......

After Immigrant Clean-Up, Dust Settles on Brazzaville
Since a police sweep drove 80,000 workers from DR Congo to Kinshasa, getting a shoeshine has become ...

Immigrants from Certain Regions may Face More Complications in State of Pregnancy
Increased monitoring during pregnancy will be required for pregnant immigrants from Sub Saharan ......