Car Seat That Identifies Its Driver 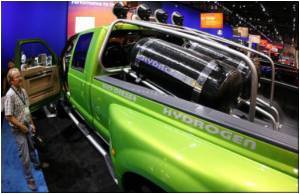 Researchers say that a car seat with an inbuilt technology to measure its driver's weight may soon be able to prevent theft.

This avant-garde product developed by researchers at the Advanced Institute of Industrial Technology in Tokyo identifies its driver by measuring the pressure their body puts on the 360 sensors.

The anti-inflammatory and anti-oxidant properties are responsible for the health benefits of olive oil.
Advertisement

Every sensor measures the driver's weight and creates a grid that matches the distribution of the weight.


Once that information is collected it is relayed to a computer, which matches it to the registered measurements and allows the car to be driven, Discovery News reported.

The seat showed around 98 percent accuracy during experiments and the research team is working with car manufacturers to come up with a commercial version of the product in about two to three years.

A few extra steps a day are enough to keep you fit.
Advertisement
<< Under US Roads, Wildlife Finds Path to Safety
'Overall School Quality' may be Improved by Focusing More o... >>

Diabetes Type 2 and Its Link to Sugar-Sweetened Beverages
News Archive
News Resource
Advertisement
News Category
Which is a Better Form of Exercise: Daily or Weekly? First Phase of Foot-and-Mouth Disease Vaccination Shocking News: Polio Cases Return After a Decade in the US Death Caused by a Rare Type Amoeba: Research Study Japan Approves Smallpox Vaccine for Monkeypox
More News
Sign up for Wellness Consult a Doctor Sign up for Selfcare

Find a Doctor Post-Nasal Drip Selfie Addiction Calculator The Essence of Yoga A-Z Drug Brands in India Color Blindness Calculator How to Reduce School Bag Weight - Simple Tips Accident and Trauma Care Sanatogen Daily Calorie Requirements
This site uses cookies to deliver our services. By using our site, you acknowledge that you have read and understand our Cookie Policy, Privacy Policy, and our Terms of Use