Under US Roads, Wildlife Finds Path to Safety 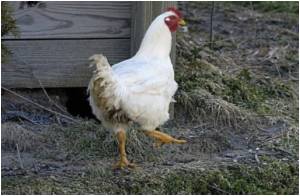 A perennial question that has haunted researchers has been: how did the chicken cross the road?

To find out, researchers in Maryland put motion-detection cameras in culverts throughout the mid-Atlantic US state to learn more about how wildlife of all kinds use culverts, or storm drains, to avoid motor traffic.

Culverts are intended to channel water under a highway. But it turns out that animals of all kinds have figured out how to exploit such man-made structures to avoid becoming roadkill.


"I was really surprised by the number of species actually using these culverts," professor J. Edward Gates of the University of Maryland's Center for Environmental Science told AFP in a telephone interview.

Anthrax is caused by the bacterium Bacillus anthracis and spreads when the anthrax spores are inhaled, ingested, or come into contact with the skin lesion on a host.
Advertisement
"It was just about every mammal in Maryland, except for three species: bobcat, black bear and coyote."

Funding for the project came from the Maryland State Highway Administration, which like its counterparts across the United States is keen to find ways to lower the cost of roadkill for animals and humans alike.

Every year, vehicle-animal collisions kill more than 200 people as well as "millions" of animals, the federal Department of Transportation says.

To assess how culverts can help, Gates' team put Moultrie Game Spy infrared cameras -- normally used by hunters to monitor game trails -- inside some 300 culverts in every county in the state.

Some of the culverts ran under Interstate 95, one of the most-traveled superhighways in North America. Others lay beneath sleepy country roads along the Chesapeake Bay and in the Appalachian mountains.

Then, over two years and eight seasons, until January this year, the researchers watched the critters come through.

Raccoons turned out to be the most frequent culvert users by far, turning up in 246 of the drain pipes on 24,800 occasions. (One of them, looking forlorn in chest-deep water, is something of a poster child for the project.)

Virginia opossums, famous for their ability to fake death when threatened, appeared 2,169 times in 103 culverts, woodchucks 822 times in 97 culverts, and red foxes 928 times in 66 culverts.

But a real surprise was the white-tailed deer, whose numbers have proliferated so much in North America that they now are more likely to be fatally hit by a car than shot by a hunter.

"We had deer using a range of culvert sizes, which we found just amazing," Gates said, with 1,093 sightings in 63 culverts.

"Most studies previously have said deer need a fairly large culvert, that they needed to be able to feel unconfined and to see through the culvert to the other side," he said.

"But we found them using culverts where their heads were nearly touching the ceiling -- so if they're motivated... they'll use a very small culvert."

Equally surprising was the great blue heron, photographed 545 times in 77 culverts, revealing that birds can be just as likely as earthbound wildlife to favor an underground route.

"All the culverts they used tended to be larger culverts, and they all contained deeper water," Gates said.

"Possibly they were on the outside catching fish or crayfish and foraging, and they just merely walked into the culvert (to go) after some additional food."

Domestic animals turned up, too, including cats, dogs, cattle (547 of them, albeit at the same one culvert) -- and that most domesticated animal of all, the human being (399 times in 66 culverts).

And chickens? "Everybody asks me that question," said Gates with a laugh. "No, we had no chickens."

Source: AFP
Advertisement
<< In the Aftermath of War, There is Urgent Need for Action on...
Car Seat That Identifies Its Driver >>