Cancerous Tumor Suctioned and Processed into a Vaccine for Clinical Trials 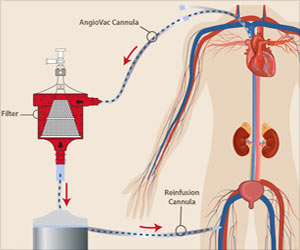 The genetic material from his tumor is under trial to produce a vaccine to help fight his metastatic disease. AngioVac employs large suction catheters to filter blood through a cardiac bypass machine and remove clots, tumors or other foreign material.

Ultrasound scan reveals multiple cysts and there is no function on that kidney when tested on DMSA scan. A vast majority of them resolve spontaneously.
Advertisement

Craig Rogers, M.D., the Henry Ford urologist and surgeon said, "This is a very exciting new way to treat these tumors. Of the 50,000 to 60,000 new cases of kidney cancer diagnosed each year in the United States alone, about a third will be metastatic, advanced beyond the kidney. Until now, these patients with complex tumors involving the major vessels have not had a lot of options. The AngioVac procedure offers one."


Chris Teodoro, 60, of Madison Heights, Mich., was admitted to Henry Ford Hospital through the emergency room after complaining of pain and blood in his urine. He was diagnosed with a very advanced cancer after scans showed a tumor in his right kidney was growing into a major blood vessel, the vena cava, toward his heart.

Adulteration of food with melamine results in the formation of kidney stones and kidney failure, even leading to death.
Advertisement
"The AngioVac procedure entails making small incisions into the major blood vessels through the skin. Essentially the entire tumor in the vena cava was removed through these tiny incisions. After a two-night hospital stay, Mr. Teodoro was discharged to return a week later for the removal of the cancerous kidney," Dr. Schwartz and Loay Kabbani, M.D., a vascular surgeon said.

Dr. Rogers said, "All that was left was the kidney tumor and a small amount of tumor in the renal vein, which was also removed during the robot-assisted nephrectomy. It allowed quick extraction of the tumor, allowing the tumor to be processed into a vaccine and Mr. Teodoro to enter the clinical trial."

Renal cell carcinoma is kidney cancer that affects the lining of the kidney tubules. The initial stages of the cancer are asymptomatic and this makes early management of the disease difficult.
Advertisement
Advertisement

An ideal tumor marker for a cancer should be specific to that cancer and not generate false positive ...