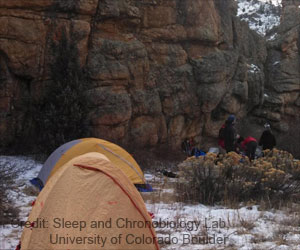 It found that 92 percent of adult campers in Scotland said that camping could make you happier - and not just for the time you're boiling the billycan and sitting outside on collapsable chairs.


Over 60 research studies were reviewed by academics at Liverpool John Moores University as well as an online survey, which concluded that people who camp have closer family relationships, are healthier, less stressed and are more socially-connected than those who don't.

Identifying with racial identity contributes to happiness, reveals a study supported by the National Institute of Mental Health.
Advertisement
"It seems that something transformational often happens when we camp that doesn't happen when we just go for a walk, a bike ride or a day out. A greater immersion in nature, which we get by being there at dusk to see or experience the sun setting and at dawn to see the sun rise, is something that differentiates camping from what others are saying about the benefits of doing other activities in nature," said Kaye Richards, senior lecturer in outdoor education at Liverpool John Moores University and chartered psychologist of the British Psychological Society, who led the research team.

"Camping should be an important consideration in the current climate, where we understand mental health, family cohesion and connection with nature to be key influences on an individual's wellbeing and quality of life," he said.

The research also showed that 85 percent of children who camp feel their parents are less stressed when they go camping, while six in 10 people agree that camping is accessible to everyone regardless of income.

Having a job is more important to Britons than the amount of salary they are paid, according to a new survey.
Advertisement
<< Royal Family: Poll Shows Support
Gene Key to Kidney Disease Identified >>