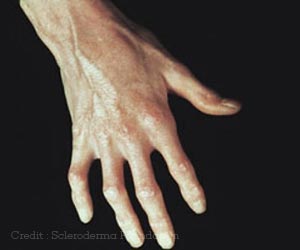 Plasmacytoid dendritic cells (pDCs) was found to be activated in scleroderma patients causing fibrosis and inflammation.

Scleroderma is a terribly debilitating disease with no effective treatments and the mortality rates are still upwards of 20%-50%, the highest of any rheumatic disease.

This disabling autoimmune disorder results in inflammation and fibrosis leading to the thickening of the body's connective tissue, including the skin; and for decades its treatment has been symptomatic and, at best, inconsistently effective. But new research by a team from Hospital for Special Surgery (HSS) in New York City may signal hope for patients suffering from the condition.


The mechanism behind systemic sclerosis is not well understood. However, new research published in Science Translational Medicine reveals a potential breakthrough in the cause of this disease, and also provides a possible treatment lead. Led by HSS researcher Dr. Franck Barrat -- the Michael Bloomberg Chair and Senior Scientist at HSS - along with clinicians of the Scleroderma center of HSS, the work implicates what are called plasmacytoid dendritic cells (pDCs) in contributing to scleroderma.
Advertisement
Normally pDCs secrete a compound called interferon to help fight off infections. However, as Dr. Barrat's study revealed, in scleroderma patients these cells are chronically activated and infiltrate the skin causing fibrosis and inflammation.

"Plasmacytoid dendritic cells are known to be activated in many other rheumatic conditions, including lupus," explains Dr. Barrat. "But our findings suggest that they participate in both establishing and maintaining fibrosis in the skin as well. This is a very interesting finding as it opens new ways to tackle this condition."

Dr. Barrat found that depleting pDCs in an animal model of scleroderma prevented the disease from forming, while also reversing already existing fibrosis. The new research also revealed that a receptor on the surface of pDCs called TLR8 is responsible for their increased activity.

Dr. Barrat fully acknowledges the limitations of the new study, in particular, the part where the research team used animal models of scleroderma, which only partially reflect the complexity of the disease in humans. But he's hopeful that not only will the new findings help illuminate the pathology of a puzzling disease, they may also represent potential novel approaches to treatment.

Strategies to eliminate pDCs are currently being evaluated by drug companies in diseases other than scleroderma. And though these potential treatments are still years away from being available, Dr. Barrat hopes that "a better understanding of the role pDCs play in fibrosis will open up the possibility of repurposing existing drugs to treat patients with scleroderma".

Source: Eurekalert
Advertisement
<< Thirty Minutes of Light Activity Reduces Risk Of Death in El...
Rare Type Of Skin Cancer Can Be Tuned To Respond To Immunoth... >>

Scleroderma
Scleroderma or CREST syndrome is a chronic, auto immune disease which manifests as thick, dry, ......

Cold Weather Injuries
Cold weather-related injuries can occur with or without freezing of tissues near the exposed part. ....

Stem Cell Transplant Improves Quality of Life of Patients With Severe Scleroderma
Patients with severe scleroderma who were treated with a stem cell transplant in a clinical trial .....