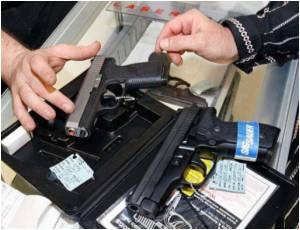 As the country attempts to staunch an epidemic of firearm-related crime, a Brazilian territory is believed to have become the first region in Latin America to ban the sale of toy guns.

The Federal District, which encompasses the country's capital Brasilia and various satellite towns, launched the initiative as Brazil moved to tackle its murder rate.

"To change the culture of violence we must begin from childhood. Our sons will start understanding what is often repeated, that guns are not toys," said Alirio Neto, the federal secretary's justice secretary.


With a population of more than 200 million, Brazil recorded 43,000 violent deaths last year, 73 percent from firearms, he noted.

The program launched a campaign against such toys in Ceilandia, the most violent city within the Federal District.

Children were asked to turn over their toy guns in exchange for a book.

Local authorities set a four-month deadline and provided trade incentives to stores saddled with stocks of toy guns they can no longer sell.

In 2005, the government of then president Luiz Inacio Lula da Silva (2003-2010) called a referendum to ban the sale of firearms nationwide, but 64 percent voted against.

Since a voluntary disarmament campaign went into effect in 2004, authorities have removed more than more than 600,000 firearms from circulation nationwide.

Popularization of Toy Guns Among Assamese Kids Provokes Peaceful Demonstration
In a telling statement, peace lovers in Guwahati organized a rally on Thursday against ......