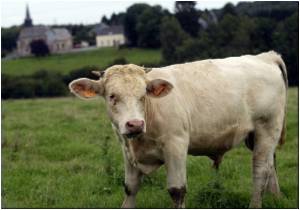 Farmer Lacir Soares is promoting sustainable cattle rearing that shuns deforestation and meets the environmental requirements of a new forestry law in a remote corner of the Brazilian Amazon.

His venture, supported by the cattle industry and environmentalists, illustrates how things are changing in the Amazon region.

Over the past decade, cattle ranching has driven deforestation and many consumers were concerned that the meat they were buying was responsible for destroying the world's biggest rain forest.


Today, field rotation coupled with genetic improvement of cattle and better pastures help Soares produce more in his "Boqueirao" farm without damaging the forest.
Advertisement
With more than 200 million head of cattle, Brazil is the world's top beef exporter -- 20 percent of beef exports come from the Amazon region -- but it also leads in low productivity: one cow per hectare (about 2.5 acres).

Soares manages to feed 2.3 head per hectare thanks to his more sustainable practices.

"The balance between cattle and forest is not just a legal obligation, it also ensures higher productivity," said Soares, a fit 69-year-old farmer and lawyer sweating under the stifling heat.

He knows that respecting the environment is the key to his economic survival.

--- The fight against deforestation --

Four years ago, the fight against deforestation in the Amazon intensified when state prosecutors targeted 13 major meat producers and threatened 72 supermarkets, shoe and cosmetic firms with legal action if they bought products from deforested areas.

The environmental group Greenpeace then released an explosive report alleging that meat and leather from deforested areas were finding their way into the industry that supplies top shoe and fashion companies as well as supermarkets and even the car industry.

Part of the solution came from technology.

In a huge area where access is difficult, satellite maps updated almost in real time make it possible to monitor where illegal logging is taking place.

Under the new forestry legislation that took effect last October, the federal government requires producers to submit to a census which determines the forest areas that must be preserved.

It joined hands with US retail giant Walmart and the US environmental group, The Nature Conservancy, to turn some local farms into environmental and economic models of meat production that can be replicated in other parts of the Amazon.

One example is Soares' ranch, touted as proof that sustainability can be good business.

"Without such sustainable practices, perhaps we could not have sold to markets such as Europe where consumers are very environmentally conscious," said Mathias Almeida, Marfrig's sustainability manager.

In Paris this year, the luxury brand Gucci launched a bag made with Amazon leather that includes environmental sustainability certification.

He said that most major meat producers have accepted the bargain.

"If they persist in deforesting, they will lose access to markets," he said.

Years earlier, a similar deal with the soybean industry, which is much more concentrated and easier to control, made it possible to slow illegal logging in the region.

Traditional Cattle-Rearing is a Thing of Past in Burundi
Before civil war decimated the prized stocks, men in Burundi once recited poems to their ......

Superbug MRSA Originated from Cattle
A type of MRSA found in humans originated in cattle at least 40 years ago, finds research....