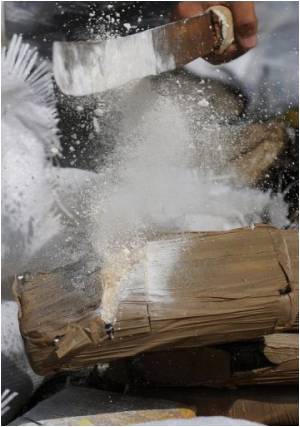 A recent study finds that Brazil has 370,000 regular crack cocaine users in major cities, including 50,000 minors.

The report commissioned by the government's Oswaldo Cruz Foundation said a total of one million Brazilians consume illegal drugs in the country's main state capitals, which are home to 45 million people.

Crack users represent 35 percent of consumers of illicit drugs and 40 percent of them live in the country's poorer northeast, the study found.


"We are investigating a hidden population that is reluctant to talk about crack use because of the criminal issue," drug policy chief Vitore Maxiliano told reporters.
Advertisement
The study found that crack users are mostly "non-whites" (80 percent) with low education who face strong social exclusion and difficulties in entering the job market.

Sixty-five percent said they obtained money for the drugs through sporadic jobs, nine percent through robberies and six percent from drug trafficking.

More than half of those surveyed said they used drugs because they were curious about the effects, 27 percent cited peer pressure and 29 percent said family or emotional problems were to blame.

The study, conducted between March and December 2012, surveyed 25,000 people.

Brazil, with a population of more than 200 million, is the world's largest crack market and the second for overall cocaine use, according to a study by the Federal University of Sao Paulo released last year.

In December 2011, Health Minister Alexandre Padilha warned that the country was facing "a crack epidemic" and the government responded with a $2.2 billion plan focusing on prevention and care.

Recreational Drugs are not Completely Safe
Recreational drugs are commonly used in rave parties. Serotonin syndrome can occur in patients ......