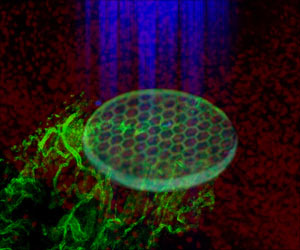 The research represents the first time biological signals presented on biomaterials have been activated by light through the skin of a living animal, and could provide a broader platform technology for launching and controlling biological processes in living animals.

"Many biological processes involve complex cascades of reactions in which the timing must be very tightly controlled," said Andrés García, principal investigator for the project. "Until now, we haven't had control over the sequence of events in the response to implanted materials. But with this technique, we can deliver a drug or particle with its signal in the 'off' position, then use light to turn the signal 'on' precisely when needed."


When biomaterials are introduced into the body, they normally stimulate an immune system response immediately. But the researchers used molecular cages like hats to cover binding sites on the peptides that are normally recognized by cell receptors, preventing recognition by the animal's cells. The cages were designed to detach and reveal the peptides when they encounter specific wavelengths of light.
Advertisement
The work involved numerous controls to ensure that the triggering observed by the researchers was actually done by exposure of the peptides - not the light, or the removal of the protective cage. The researchers also had to demonstrate that the "hats" were stable enough that they didn't come off spontaneously, but only when the link between the molecular cage and the peptide was severed by the ultraviolet light.

Among the experiments was use of the peptide to attract cells that would attach themselves to the biomaterial. "We showed that if we left the hat on, there would be few cells attracted to the material, García said. "But when we take the hat off, we recruited a lot of cells to the material. That shows we can activate the peptide, and that the activation has a biological consequence."

Another experiment showed that the timing of peptide activation could affect the quantity of fibrosis, an immune system response that builds a protective capsule around an implanted biomaterial. By delaying the exposure of the peptides until after the bulk of the inflammation reaction had taken place, the thickness of the fibrosis capsule was significantly reduced, allowing it to be better incorporated into the body.

In another experiment, the researchers showed that removing the hats could trigger the growth of blood vessels into the material. This vascularization is critical in regenerative medicine, but must take place at the right time to be successful.

In the future, photochemists at Max-Planck will be working on alternative cages that would be triggered by different wavelengths of light. As much as 90 percent of the ultraviolet light used in the experiments was lost in passing through the skin of the animal model, limiting the use of that wavelength to locations immediately below the skin.

Light, heat, and electricity have been used to trigger biological processes in vitro, García noted. Light is especially useful because it can be patterned to control processes spatially, which is also important because the processes must occur not only at the right time, but also the right place.

"The technique we developed is a general strategy that we can apply to other biological signals to see if they have similar spatio-temporal effects," said García. "We see this as a beginning. From here, there are many, many applications that we can follow."