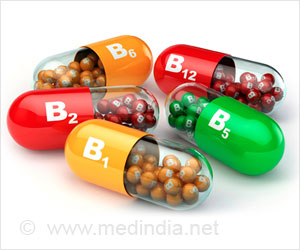 Taking B-vitamin supplements can improve cognitive functions such as memory, attention, language, and learning abilities in psychotic patients. The findings of the study are published in the journal Biological Psychiatry.

Intake of B-group vitamin supplements may be beneficial for maintaining concentration skills among people experiencing a first episode of psychosis -- a precursor to developing schizophrenia, finds a study.

Vitamin B-12 is also known as cobalamine or cyanocobalamine, owing to the presence of the metal, cobalt. Cyanocobalamine is used in most supplements because it is readily converted to active forms of vitamin B-12 in the body.
Advertisement
‘Increased intake of B-vitamin supplements can improve concentration skills among psychotic patients, reveals a new study.’
Read More..
Tweet it Now


The findings showed that patients with psychosis who took vitamins B12, B6, and folic acid (vitamin B9) for over 12 weeks saw improvement in their cognitive functioning such as memory, attention, language, and learning abilities.


"This indicates the B-vitamins could have a neuroprotective effect," said Kelly Allott from Orygen -- an Australia-based research center for youth mental health.

Vitamin B1 or thiamine is a B complex, water-soluble vitamin necessary for brain, heart, nerve and eye health. Vitamin B1 deficiency can cause beriberi.
Advertisement
They may also protect these skills from declining, Allott said.

The study stems from previous studies in people with schizophrenia which revealed that increased intake of vitamins B12, B6, and folic acid (vitamin B9) could decrease patients' levels of an amino acid called homocysteine and improve their symptoms.

Allott said elevated levels of homocysteine in people living with schizophrenia had been associated with more severe symptoms.

In the new study, 100 young people were randomly assigned to receive either B-vitamin supplements or a placebo tablet once per day over 12 weeks. During this period, patients' homocysteine levels, symptoms, and cognitive functioning were assessed.

Interestingly, participants who had abnormally high homocysteine levels at baseline were most responsive to the B-vitamin supplements, in terms of improvement in attention.

"The results support a more personalized approach to vitamin supplementation in the first episode of psychosis, suggesting those with elevated homocysteine are likely to benefit most," said Allott.