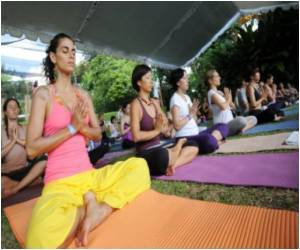 It has emerged that yoga is very popular at Brigham Young University (BYU), a prestigious institute of USA sponsored by The Church of Jesus Christ of Latter-day Saints (LDS).

Its "Yoga on the Edge" class, offered every Tuesday and Thursday evenings, is so popular that BYU has to put a special "note" on its website, saying: The "Yoga on the Edge"...is a very popular class. You may need to arrive early to secure a spot in the room." BYU is also offering "Pilates/Yoga Infusion" class.

Welcoming the interest of BYU students in yoga, distinguished Hindu statesman Rajan Zed, in a statement in Nevada (USA) today, said that although introduced and nourished by Hinduism, yoga was a world heritage and liberation powerhouse to be utilized by all.


Zed, who is President of Universal Society of Hinduism, further said that yoga, referred as "a living fossil" whose traces went back to around 2,000 BCE to Indus Valley civilization, was a mental and physical discipline handed down from one guru to next, for everybody to share and benefit from. According to Patanjali who codified it in Yoga Sutra,yoga was a methodical effort to attain perfection, through the control of the different elements of human nature, physical and psychical.

The healing effects of yoga benefit those suffering from backpain, by alleviating their pain and also preventing its recurrence.
Advertisement
Rajan Zed argued that yoga, which never had any formal organization, was the repository of something basic in the human soul and psyche. According to an estimate, about 16 million Americans, including many celebrities, now practice yoga.

BYU in Provo (Utah, USA), established in 1875 and which enrolls about 33,000 students from all over USA and 120 countries, has been ranked in the top 100 "Best national universities" by U.S. News and World Report and its accounting program is claimed to be ranked number one by Wall Street Journal. Its alumni number around 404,000, and its non-LDS students (about 1.5% of total student population) pay double tuition as compared to LDS students. Its Mission Statement includes: "The mission of Brigham Young University-founded, supported, and guided by The Church of Jesus Christ of Latter-day Saints-is to assist individuals in their quest for perfection and eternal life". Dr. Cecil O. Samuelson is the President.

Yoga is one very effective exercise - to add a few inches to your height -- when done correctly and diligently. With yoga a person can cleanse oneself physically as well as improve their mental faculties.
Advertisement
<< Soon, New Drugs to Cure Breast Cancer
Survey of Adult Autism Proves No epidemic >>

How to Reduce School Bag Weight - Simple Tips Accident and Trauma Care Iron Intake Calculator Daily Calorie Requirements Sanatogen Find a Hospital Find a Doctor Blood Donation - Recipients Hearing Loss Calculator Drug - Food Interactions
This site uses cookies to deliver our services. By using our site, you acknowledge that you have read and understand our Cookie Policy, Privacy Policy, and our Terms of Use