Allopurinol Does Not Increase Risk of Kidney Deterioration in Gout Patients 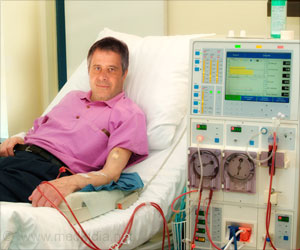 Allopurinol, a widely used treatment for lowering serum urate levels, does not appear to increase risk of kidney deterioration in gout patients with normal or near-normal kidney function, suggests new research presented this week at the 2016 ACR/ARHP Annual Meeting in Washington.

Chronic kidney disease (CKD) is a gradual loss of kidney function that can lead to fluid, electrolyte and waste build-up in its advanced stages. Gout, a condition marked by high levels of uric acid that can crystallize and settle in joints, can contribute to CKD in some patients.

People with a kidney stone episode were observed to have a subsequent abnormal kidney function, revealed Mayo Clinic nephrologists.
Advertisement
‘Gout, a condition marked by high levels of uric acid that can crystallize and settle in joints, can contribute to chronic kidney disease in some patients.’

Hyperuricemia, or high serum urate levels in the blood, can lead to CKD, but clinicians have been cautious about using allopurinol in these patients because of potential adverse events. Researchers conducted a study to examine the risk of allopurinol use in gout patients who have normal kidney function and need to lower their urate levels.


"Gout management is frequently suboptimal. Further exacerbating this poor management is the common practice of lowering the dose of or stopping allopurinol when a patient with gout begins to have a decline in kidney function, which inevitably adds to the poor control of their gout," said Ana Beatriz Vargas-Santos, PhD, who conducted the study while she was at the Clinical Epidemiology Research and Training Unit at the Boston University School of Medicine.

The build up of excess urea in the blood of patients with chronic kidney disease causes imbalance of blood glucose levels leading to diabetes.
Advertisement
"However, it is not clear that allopurinol is detrimental to kidney function, with some small studies suggesting that it may actually be beneficial for preventing renal decline. We therefore investigated the risk of developing CKD related to allopurinol initiation among subjects with normal or near-normal kidney function. If no such increased risk is found, then this would mean that clinicians should not unnecessarily stop, hold or decrease the dose of allopurinol when a patient's kidney function declines, and instead should think about other factors that may be contributing to the kidney function decline."

The study used electronic health record information from The Health Improvement Network (THIN), a database of patients treated by general practitioners in the United Kingdom. They included patients aged 18 to 89 with incident gout between 2000 and 2014 who had at least one contact with a general practitioner within a year before the study period. They looked at the relationship between allopurinol use by patients with gout to the development of CKD Stage 3 or higher. Since patients who initiated allopurinol may have stopped and non-users may have started the therapy during the study period, they performed a sensitivity analysis to censor study subjects whose exposure to the drug changed at some point.

The researchers identified 13,727 patients who starting allopurinol and were matched by propensity score to 13,727 patients who did not use the drug. The subjects had a mean age of 58 and body-mass index of 30, and a mean follow-up time of four years for both groups. Allopurinol use was not associated with an increased risk of developing CKD ?Stage 3 compared with non-use, with 1,401 of the allopurinol initiators and 1,319 non-users having developed CKD at ?Stage 3 disease, resulting in a relative risk of 1.05, which was not statistically significant. Allopurinol can help lower serum urate levels to improve gout symptoms without an increased risk to the kidneys, they concluded.

"Our results help to mitigate the concern that allopurinol is harmful to the kidney functioning of patients with gout," said Dr. Vargas-Santos. "This might encourage physicians to properly dose allopurinol, resulting in better outcomes for these patients. More studies are needed to further clarify this issue, including studies among subjects with established and advanced chronic kidney disease."

This research was supported by funding from the NIH's National Institute of Arthritis and Musculoskeletal and Skin Diseases.

Vitamin D levels were lower in winter months than at other times of the year in children with chronic kidney disease (CKD).
Advertisement
<< Keep Diabetes on Check to Avoid Visual Impairments
Pesticide Exposure Linked to Changes in Oral Microbiome >>