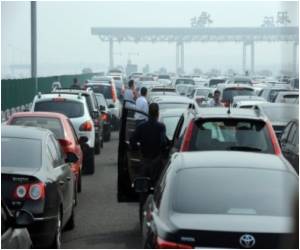 Exposure to traffic air pollution in infancy impairs lung function in children up to eight years of age, especially those sensitized to common allergens, finds a new study.

"Earlier studies have shown that children are highly susceptible to the adverse effects of air pollution and suggest that exposure early in life may be particularly harmful," said researcher Göran Pershagen, MD, PhD, professor at the Karolinska Institutet Institute of Environmental Medicine in Stockholm, Sweden. "In our prospective birth cohort study in a large population of Swedish children, exposure to traffic-related air pollution during infancy was associated with decreases in lung function at age eight, with stronger effects indicated in boys, children with asthma and particularly in children sensitized to allergens."

The findings were published online ahead of print publication in the American Thoracic Society's American Journal of Respiratory and Critical Care Medicine.


The study included more than 1,900 children who were followed from birth through age eight with repeated questionnaires, spirometry and immunoglobulin E measurements. Outdoor concentrations of particulate matter from road traffic were estimated for residential, daycare and school addresses using dispersion modeling, a mathematical simulation of how air pollutants disperse in the atmosphere.

A recent study suggests that higher PM10 and NO2 (traffic associated pollutants) levels are associated with increase in myocardial infarction risk just 1-6 hours later following the exposure.
Advertisement
A 5th to 95th percentile difference in time-weighted exposure to outdoor concentrations of particulate matter from road traffic during the first year of life was associated with a reduced forced expiratory volume in one second (FEV1) of -59.3 mL (95% confidence interval (CI): -113.0 to -5.6) at age eight. This negative association was particularly pronounced in children who were sensitized to common inhalant and/or food allergens and also seemed stronger among boys and among children with asthma.

Exposure to traffic-related air pollution after the first year of life appeared to have less impact on subsequent lung function.

The study had a few limitations. Calculations of particulate matter concentrations were only performed for the year 2004 and were extrapolated to the other years of follow-up, and some miscalculation of individual exposure levels was likely.

"Our study shows that early exposure to traffic-related air pollution has long-term adverse effects on respiratory health in children, particularly among atopic children," concluded Dr. Pershagen. "These results add to a large body of evidence demonstrating the detrimental effects of air pollution on human health."

Air pollution triggers more heart attacks than most other risk factors, suggests study. It poses as high a risk of setting off a heart attack as alcohol, coffee and physical exertion.
Advertisement
<< One Chinese Dies of Heart Disease Every 10 Seconds
Just Minutes of 'Vigorous Exercise' can Lead to All-day Cal... >>

The lungs are our organs of respiration. It is within these, that exchange of gases takes place.
Advertisement
News A-Z
A B C D E F G H I J K L M N O P Q R S T U V W X Y Z
What's New on Medindia