One Chinese Dies of Heart Disease Every 10 Seconds 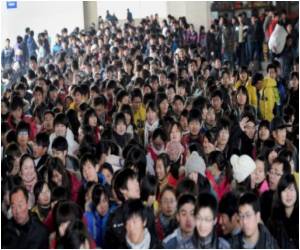 Urgent actions including smoking bans in public places, salt restrictions and improved blood pressure control are needed to fight rising cardiovascular disease in China. Half of male physicians in China smoke and they can lead the way to healthy lifestyles by kicking the habit.

Professor Dayi Hu, chief of the Heart Center at the People's Hospital, Peking University and president of the Chinese Society of Cardiology (CSC) said that "prevention has not been a priority in China because for the last 20 to 30 years the medical system has mainly been treating the late stages of heart disease. The number of patients treated with stents has increased dramatically."


Professor Hu was speaking ahead of the 23rd Great Wall International Congress of Cardiology and Asia Pacific Heart Congress, which take place 11-14 October 2012 in Beijing, China. The European Society of Cardiology (ESC) will present a full day of scientific sessions at the event, on Saturday 13 October, as part of its Global Scientific Activities (GSA) program.

Heart disease is a major killer worldwide in spite of major strides in the medical field in terms of research, diagnosis, treatment and pharmacology. HIV/AIDS and Alzheimer's disease are vying for popular attention these days and people tend to sideline or neglect healthy heart awareness. Take our quiz and refresh your awareness on heart disease.
Advertisement
ESC President Panos Vardas will head the European delegation (2). He said: "The ESC is delighted to return to China, where I anticipate fruitful discussions between Chinese and European experts on how the latest ESC Clinical Practice Guidelines on Prevention can be applied. I also look forward to comparing the results of Chinese and European registries, since we know that registries are an important tool for monitoring lifestyle behaviors and implementation of guidelines."

China has experienced fast industrialization. In just over 30 years GDP per capita increased by nearly 80-fold, from 381 Yuan in 1978 to 29,748 Yuan in 2010. The country has also had fast urbanization. In 1978 just 18% of the population lived in cities. This had risen to 50% by 2010 and is predicted to reach 55% by 2015. These social transformations have led to dramatic changes in the lifestyle of the entire population.

Smoking is a massive problem in Chinese men - 54% of men smoke. "Half of male physicians are smokers and one-third of Chinese male cardiologists are smokers, so it's a real problem," said Professor Hu.

"We need to work together with the big hospitals to improve the control of hypertension," said Professor Hu. "It will also be important to measure blood pressure levels of people living in rural areas so that we can identify people with hypertension."

CVD accounted for nearly half of the burden of disease in China in 2010, as measured by disability adjusted life years (DALYs) which indicates the number of years lost due to ill health, disability or early death. It is predicted that by 2030, CVD will be top cause of future total DALY lost in China. But tobacco control could avert around 10 million DALYs at just a few cents (US) or less than 0.04 Yuan per capita annually.

Tobacco control measures include: Banning smoking in public places, increasing taxes on tobacco, enforcing bans on tobacco advertising, promotion and sponsorship and helping smokers to quit and warning about the dangers of smoking.

China does not have national laws to ban smoking in public areas and there is no central government policy. There are some smoke free hospitals and some cities and provinces have instigated smoking bans in public areas but Professor Hu said these efforts are not sufficient.

He said: "The government needs to make strict laws to prohibit smoking in public places. The Chinese Society of Cardiology plans to work with the government to control tobacco. Given the high level of smoking in male physicians and cardiologists, efforts to quit should start with them."

Salt intakes are also high. More than 80% of Chinese adults living in urban areas consume more than five grams of salt each day. Reducing daily salt intake from 10 grams to 5g could reduce stroke rates by 23% and CVD rates by 17% at a cost of less than US$1 per person per year if combined with a tobacco control strategy.

Strategies for reducing salt intake include: Developing nutrition guidelines that are easily understood by the general population, making healthy good more available and affordable through voluntary or legislated pricing and food labelling, encouraging food manufacturers to reduce levels of salt, educating the public and monitoring dietary intake of the population.

"In China we should educate the public through television to eat less salt," said Professor Hu. "We also need to promote healthy cafeteria food with a lower salt content because many children eat in the school cafeteria and many working people eat lunch and dinner in the company cafeteria rather than at home."

Obesity has increased in China, with unhealthy lifestyles starting at a young age. Professor Hu said: "We should do more health promotion and health education at a population level, starting with children, to encourage people to do more exercise and to eat healthy food."

"I think a healthy China has to be started from the healthy physician," said Professor Hu. "Physicians and cardiologists need to quit smoking, eat healthily, exercise and control their body weight so that they can be a good example for patients and the public, and effectively promote CVD prevention measures with the government, pharmaceutical companies and food manufacturers. I believe that if there is no healthy physician there will be no healthy China."

Heart disease can be of many types depending upon whether they involve the heart muscles or artery walls or heart beats. Bad lifestyle choices contribute to heart disease.
Advertisement
<< Electronic Health Records Improve Quality of Life
Air Pollution Exposure in Infancy Linked To Reduced Lung Fu... >>

Statins
News Archive
News Resource
Advertisement
News Category
Death Caused by a Rare Type Amoeba: Research Study Japan Approves Smallpox Vaccine for Monkeypox Did Human Evolution Shrink Your Brain? What to Do When Your Asthma Medication Doesn't Work? Which is Better to Improve Smoker's Health  Cigarettes or E-Cigarettes?
More News
Sign up for Wellness Consult a Doctor Sign up for Selfcare

Sinopril (2mg) (Lacidipine) Drug Side Effects Calculator Find a Doctor Vent Forte (Theophylline) Color Blindness Calculator Drug - Food Interactions Nutam (400mg) (Piracetam) Calculate Ideal Weight for Infants The Essence of Yoga Find a Hospital
This site uses cookies to deliver our services. By using our site, you acknowledge that you have read and understand our Cookie Policy, Privacy Policy, and our Terms of Use