A Pint of Beer can Help People Lose Weight 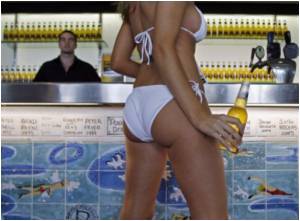 Swapping two glasses of red a night for a pint of beer can help people lose weight, according to a new study.

Research by the Campaign for Real Ale (CAMRA) has shown that drinking beer rather than wine could mean losing almost 10lb in a year. And by ditching alcopops for beer, people could end up 19lb lighter.

Beer contains fewer calories than wine - although around a third of people mistakenly believe beer has more calories than other drinks, says the study.

Changing drinks for just a week would burn off more calories than an hour's jogging.

Information about the different types of alcoholic beverages, its production and tips on serving alcohol.
Advertisement
"For years beer has been blighted by a reputation for being more fattening," the Sun quoted brewing expert Prof Charlie Bamforth as saying.

"The major source of calories in any alcoholic drink is the alcohol itself, and because beer is the drinks category with the lowest average alcohol content, it's also lowest in calories," Bamforth added.