by Thilaka Ravi on  January 31, 2014 at 2:54 PM Medindia Exclusive - Interviews and In depth Reports 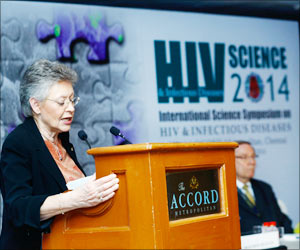 From the time it was variously called "gay cancer" or gay related immunodeficiency (GRID) or community acquired immune dysfunction to its identification and establishment as one of the most feared and controversial diseases in modern history, the HIV/AIDS drama as it gradually unfolded and the current challenges in AIDS management were discussed in the inaugural session of the second International Science Symposium on HIV and Infectious Diseases in Chennai, South India (HIV SCIENCE 2014) organized by YRG CARE India. 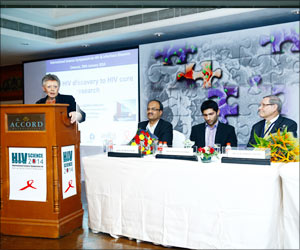 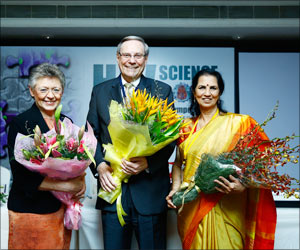 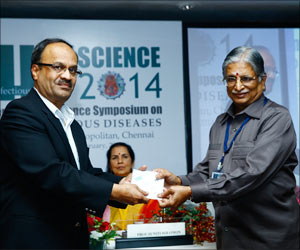 In her keynote address Prof François Barré-Sinoussi, Nobel Prize winner in Medicine-2008 for HIV discovery, President, International AIDS Society, Geneva, Director Regulation of Retroviral Infections Division, Institut Pasteur, France, elaborated on the journey from HIV discovery to HIV cure. She explained the evolution of technologies of research on retroviruses and how clinicians mobilized the retrovirologists at the Intituit Pasteur to arrive at the first report of LAV (lymphadenopathy-associated virus) in Science in May 20th 1983.


Then began the crucial phase of convincing the scientific community and public authorities that LAV was the etiological agent of AIDS which had to be done on a war footing to identify the disease quickly and prevent its spread. Between 1984 and '85 collaboration with Sanofi Diagnostics Pasteur for production of viral antigens on site, saw a progression with first generation ELISA test and first generation Western Blot test.

Prof Barré-Sinoussi outlined the challenging task of cloning and sequencing of HIV-1 genome at that time and how the dawn of a new era started with combined ART therapy. Listing the current updates on HIV research and the promises of a functional cure of HIV, the Nobel laureate summed up the 30 years of HIV/AIDS journey as a great example of translational research.

What we need today in the search for a realistic "functional cure" for HIV/AIDS that promises life-long remission after stopping therapy or long term health with ART are novel, creative ideas, multi disciplinary collaboration partnerships between private and public sectors, international coordination and funding. Among the 35.5 million people living with HIV (PLWH) only 9.7 million are on ART therapy and there are an increasing number of patients in need of costly 2nd line and 3rd line regimen.

Dr Jack Whitescarver, Director, Office of AIDS research National Institute of Health USA, gave the audience an insight into the initial challenges that the scientific community faced in the early 1980's when very young men were diagnosed with Pneumocytis Pneumonia Carinii (PCP), generally found only in people with seriously compromised immune systems. While the disease was yet unidentified it was thought to be the result of some infectious organism or something that went seriously wrong with the immune system. What was more frightening was the ghastly appearance of the patients as if they were starved for months and they were dying for unknown reasons and that was scary.

Encouraging young scientists to think out of the box and continue to ask questions, however weird, Dr. Whitescarver said some of the initial guesses before HIV was discovered, were that it could be from a sort of fungus and one clinician even guessed "it could be from dogs because gay men sleep with their dogs!"  First cases were spotted among gay men Haitians and hemophiliacs, but the scenario changed with heterosexual infections and prompted a state of emergency to quickly diagnose the disease and find a cure.

Highlighting HIV/AIDS research and treatment in India, Dr. Suniti Solomon Founder-director YRG CARE who documented the first evidence of HIV infection in India in 1986, said the legal system in India that labels homosexuality a criminal offence sends the most vulnerable group into hiding, seriously hampering health intervention for HIV/AIDS.

Challenges in AIDS management that are India-specific revolve around socio-cultural issues such as marriage, fertility pressure and stigma. Very often parents of a homosexual person hide his sexual orientation, sometimes, even the fact that he is HIV infected and force him into marriage with an unsuspecting girl thus paving the way for heterosexual infection. A woman is often pressurized into having a baby as soon possible after marriage and even if she knows her husband is HIV +, the hapless woman gets pregnant to avoid the "barren woman" stigma and transmits HIV infection to the baby.

On the brighter side, there is now the ART revolution in India where treatment for HIV is almost immediately available and there is counseling, universal precaution, advocacy, public-private partnerships, slight increase in proper sex education to teenagers and most importantly ethical guidelines in research were firmly established after AIDS was found in India.

The inaugural session was followed by a community training workshop on HIV cure: the basic facts and future direction. Interactions between participants and experts in the field were encouraged through question and answer sessions and a series of panel discussion and scientific paper presentations are scheduled for the next couple of days. Accepted abstracts will be published in the   PubMed indexed journal, BMC Infectious Diseases.

The symposium attended by over 500 delegates from around the world is scheduled from 30th January - 1st February, 2014 organized by YRG CARE, India. Though we are now in the era of eradication, a lot of unanswered questions remain, in terms of HIV/AIDS eradication and cure. The symposium invites young researchers to think out of the box and come up with fresh ideas to take HIV/AIDS research to the next level to find a permanent cure and  maybe even an eradication of the dreaded HIV/AIDS.

Plight of Indian Maids Overlooked in US Diplomat Row
The alleged $3.31-per-hour wage paid to an Indian diplomat's housekeeper in a case that has sparked global outrage has shocked many Americans.
READ MORE