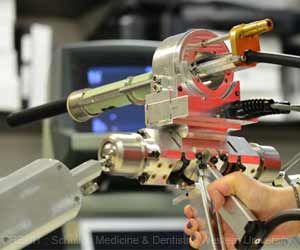 New technology developed at Western University is providing an improved way for radiation oncologists to deliver treatment to women with gynecological cancers, including vaginal, cervical and uterine cancer.

Cancers arising from the organs of the female reproductive tract (uterine, ovarian, cervical, vulval and vaginal cancers) are termed gynecologic cancers.
Advertisement
‘By transforming a conventional ultrasound probe, the innovative technology developed can provide a 360-degree, 3D view of surgical tools and surrounding tissue and organs to give a more accurate picture in the operating room for clinicians who need to precisely insert needles for the treatment of gynecological cancers.’
Read More..
Tweet it Now


By transforming a conventional ultrasound probe, already found in most clinics, the technology can provide a 360-degree, three-dimensional view of surgical tools and surrounding tissue and organs. It provides a clearer and more accurate picture in the operating room for clinicians who need to precisely insert needles into the tumor for a procedure called interstitial brachytherapy, a type of targeted radiation therapy that uses intense energy to kill cancer cells in the tumor from the inside out.


"The problem with the procedure the way it is now is that doctors don't have a great way of seeing where those needles are going while they are placing them," said Jessica Rodgers, a Ph.D., Candidate at Western's Schulich School of Medicine & Dentistry and lead author on a feasibility study of the technology. "If they can't place the needles precisely, they may not be placed optimally for giving treatment and may be impinging on organs that are nearby that you don't want to over irradiate."

Cancer cervix refers to cancerous growth in the cervix and usually occurs in the transition called squamo-columnar junction.
Advertisement
The study's principal investigator, Aaron Fenster, Ph.D., is a professor at Schulich Medicine & Dentistry and a Scientist at Robarts Research Institute who has been developing 3D ultrasound technology for over three decades. He says this technology has potential to be practice-changing.

"The short term goal is to reduce complication rates - ensure that the needles don't go into the bladder, or the rectum, which creates complications, and in addition, something we are hypothesizing, is if the needles are placed correctly they will provide an improved dose pattern distribution to the tumor and surrounding tissue," he said.

Before the introduction of this technology, clinicians would use pre-operative imaging to place the needles using 'feel' while a patient is under anesthesia. They would then check the needle placement afterward with CT once the patient is awake. In partnership with Lawson Health Research Institute, the new technology was tested by radiation oncologists on six patients at London Health Sciences Centre (LHSC), with very promising results.

"This technology provides the operator with live feedback and visualization of the needle placement in real time, and allows for needles to be adjusted while the patient is still asleep," said Dr. Vikram Velker a professor at Schulich Medicine & Dentistry, Lawson Health Research Institute researcher and radiation oncologist at LHSC.

Dr. David D'Souza, also an LHSC radiation oncologist who tested the technology says it is like having a backup camera on your car.

"Interstitial needles allow a radioactive source to go directly into the tumor tissue resulting in a better dose of radiation, which is hoped to translate into better chances of eradicating cancer. The 360 3D ultrasound is an additional tool to guide the placement of the needles in an accurate manner," said Dr. D'Souza who is also a professor at Schulich Medicine & Dentistry and Lawson researcher.

One of the other benefits of using ultrasound technology is the accessibility and wide application globally in places where resources are more scarce.

"Access to high-end imaging systems like CT and MRI to diagnose and treat diseases is difficult in some places in the world. So for that reason, we've been focusing on ultrasound which is widely available everywhere in the world and can be used for a variety of applications," said Fenster.

Ultrasound scan or sonogram uses sound waves to obtain images of the internal organs. Ultrasound scan is used ...
This site uses cookies to deliver our services.By using our site, you acknowledge that you have read and understand our Cookie Policy, Privacy Policy, and our Terms of Use  Ok, Got it. Close
×