Breastfeeding is the major source of nutrition for most infants during the first few months of their lives. This is especially true in the developing nations. Its numerous benefits, both with respect to health and otherwise cannot be underestimated.

In order to promote, protect, educate about and support breastfeeding globally, the World Alliance for Breastfeeding Action (WABA) was formed in 1991. The original plan of dedicating one day annually to promoting breastfeeding became a full week.


Starting from 1992, every yearthe week between August 1 -7 is celebrated as the World Breastfeeding Week (WBW). Over 170 countries participate in this venture, which is supported by UNICEF, WHO, FAO and IPA.

In September 2015, world leaders pledged to achieving 17 goals aimed at ending poverty, protecting the earth and ensuring prosperity. These came to be referred to as the​
Sustainable DevelopmentGoals (SDGs)​.

The goals and objectives of the World Breastfeeding Week 2016 include the following:

During this World Breastfeeding Week, it will be apt to once again re-iterate the numerous benefits of breastfeeding and breast milk. It is essential that women all over the world understand and appreciate the importance of this simple, yet under-rated practice. Given below are 15 facts about breastfeeding, its many benefits and role of society in supporting and promoting it.

2. Feeding should be on demand as frequently as the baby wants irrespective of whether it is day or night. Keeping pacifiers or dummies in the babys mouth should be avoided. Infants should be exclusively breastfed for the first 6 months.

3.  Breast milk contains all the necessary nutrients for the babys healthy development. In addition, it contains protective antibodies that prevent neonatal diarrhea and respiratory infections, two of the leading causes of infant death. Lactating mothers are advised not to breastfeed their child for at least 3-4 hrs after alcohol intake.

4. Breast milk does not require any sterilization or mixing. There is no risk of addition of water that may be unsafe or infection from poorly sterilized equipment. In addition, it comes at the correct temperature for the baby  neither too warm nor cold. Most importantly, it is readily available and saves money spent on infant formula.

5. Long-term benefits for the child include better health as adolescents and young adults. Breastfed children have a lower incidence of obesity, type II diabetes and also tend to perform better in intelligence tests.

6. Breastfeeding benefits the mother too. It acts as a natural (around 98% safe) method of birth control. However, this method is not fool-proof as lactating women are known to get pregnant. Women who breastfeed their infants have a lower incidence of breast and ovarian cancer, type II diabetes and post-partum depression.

7. Interestingly, the WHO recommends that HIV infected mothers be allowed to breastfeed. They should get anti-retroviral (ARV) therapy and follow WHO recommendations for breastfeeding the infant. ARV drugs given to both the mother and the infant are said to decrease the risk of transmission. Breastfeeding and ARV therapy given together to the baby help the baby to remain un-infected and increase chances of survival.

8. International codes have been in place since 1981 to regulate any promotion or distribution of milk substitutes and infant formula in hospitals, health centers or to health workers. All infant formula labels should carry prominently the benefits of breast milk on their label. Such practices will go a long way in promoting breastfeeding.

9. Proper positioning and technique for latching on to the breast is essential to prevent nipple soreness and allow the baby to feed satisfactorily.

Different babies and mothers may prefer different positions.
The mother can opt for a reclining position on her back or side with the baby lying next to her.

10. Mothers can express their breast milk either manually or by means of a pump and store in special containers for future use. This is done to feed the child breast milk when the baby and mother are apart.

The milk can be maintained at room temperature for close to six hours, refrigerated for nearly eight days or frozen for six to twelve months.

11. From 6 months of age, the baby should be given mashed solids such as easy to digest fruits and vegetables. This process is termed as weaning. Breastfeeding should not be reduced while starting on solids. Solid food should be fed with a spoon (not in a cup or bottle). Time should be given for baby to get used to solid foods.

12. Mothers should eat a healthy and balanced diet when they are lactating. They need to consume at least 500 calories extra each day to maintain their health. Protein-rich foods such as eggs, lean meat, dairy and lentils are recommended. Diet should include whole grains, fruits and vegetables.

Necessary dietary supplements as recommended by the doctor have to be taken.

13. Lactating mothers should avoid alcohol or take it occasionally. Breastfeeding should be avoided for 2 hours after the drink.

14. Public places should have clean and safe private areas devoted for breastfeeding or expressing the breast milk.

Mothers should be given paid leave after delivery to breastfeed the baby and take care of the baby. Many work places nowadays have on-site crèches, facilities to express and store breast milk, and break from work for breastfeeding.

15. Breastfeeding should be actively promoted and encouraged by including information about it in mass-media campaigns, street shows and child health brochures and activities.

Support groups should be organized at the community level to remove myths and fears, especially among first-time mothers. 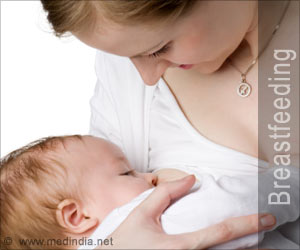