Interesting Facts and Statistics about Tuberculosis

Tuberculosis is an infection caused by the bacterium, Mycobacterium tuberculosis. The bacterium doesnt just affect the lungs but can also attack other organs and parts of the body like the brain, kidneys and spine. Treatment for tuberculosis can be quite effective, provided the treatment is strictly adhered to in terms of medications and dosages, as well as the duration of treatment. Failure to treat the disease appropriately often spells disaster as it greatly increases the risk of fatality. As in the case of almost all infectious diseases, the adverse effects of tuberculosis are highest in developing and underdeveloped countries, where huge sections of the population live in extreme poverty.


Tuberculosis was once a dreaded disease across the world but it was largely contained in the developed world with advances in medical science. The history of tuberculosis has had some ups and downs however, as the disease began to make a resurgence in the 1980s with the onset of the HIV epidemic. Patients suffering from AIDS have a compromised immune system, making them more vulnerable to various infections, including tuberculosis. This made HIV positive patients perfect hosts for the disease. Efforts to control the rise of tuberculosis were somewhat effective by the mid-1990s. Unfortunately, the past decade has witnessed a new problem that has raised old fears of tuberculosis. There are different types of tuberculosis and some strains have developed resistance to antitubercular antibiotics, rendering conventional medications ineffective. This has given rise to a whole new set of problems and concerns about the abuse of antibiotics, irresponsible usage of medications, and failure to adhere to recommended dosages, as these issues have contributed to and continue to aggravate the problem.

How Do You Get Tuberculosis?

Tuberculosis is an air-borne disease that spreads through the inhalation of contaminated air. When a patient suffering from an active tuberculosis infection coughs, sneezes or expels air, tiny droplets that contain germs are also released into the air. An individual can develop tuberculosis from inhaling such air. While this may seem terrifying, fortunately the risk of infection for healthy adults is rather low. In most cases, the infected person will just exhale a few bacilli and the healthy immune system can fight off the infection. The risk of infection is only high for individuals who are in prolonged contact with someone suffering from an active infection. Prolonged contact would imply being around the infected person for at least 3 weeks or a few months.

While tuberculosis is highly contagious, it does not pose a grave public health risk. While public awareness is important to prevent spread of the infection and to effectively treat existing cases, it is not a cause for panic. To put things in perspective here are some interesting facts and statistics on tuberculosis. 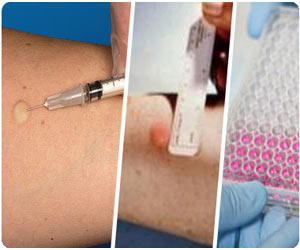