Renal tubular acidosis is a condition where the kidneys are unable to maintain the acid  base balance in the body due to defect in secretion of acid, reabsorption of bicarbonate or both. This results in acid content of the blood being higher than normal and that of the urine lower than normal.

The pH of the blood is normally maintained in a tight range between 7.35 to 7.45. Ions such as bicarbonate increase the pH and make the blood alkaline. On the other hand, hydrogen ions make it acidic.

The kidneys play a very important role in controlling the pH. The kidneys produce urine by filtering waste products from the blood. They consist of a large number of small units called nephrons. Each nephron consists of a cup shaped structure called the glomerulus and a long tubule. The tubules end in the collecting ducts. These ducts ultimately lead to the funnel shaped collection area called pelvis. Finally the urine flows into the bladder through a 25 cms small diameter pipe called the ureters that connect the pelvis of the kidneys to the bladder. 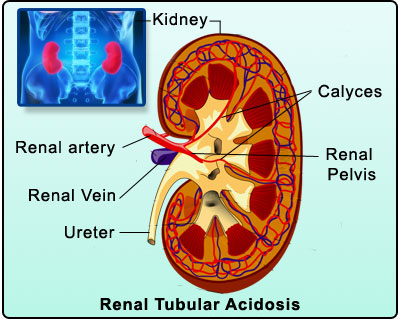 Filtration of blood takes place at the level of the glomerulus. The filtrate passes through the tubules that reabsorb a large amount and divert it back into the blood. The cells lining the first part of the tubules reabsorb bicarbonate from the urine. This process maintains the alkalinity of the blood and makes the urine more acidic. In the later or distal part, the tubules throw out hydrogen into the urine making it even more acidic. This process further reduces the acidity of the blood. A hormone aldosterone secreted by the adrenal glands also acts on the tubules at this level and plays a role in the excretion of hydrogen and potassium in exchange for sodium.

Any condition that affects the reabsorption of bicarbonate or secretion of acid or hydrogen ions into the urine or both at the kidney tubule level can cause RTA. In some cases, a permeability defect leading due to increased back leak of hydrogen ions can also contribute to the development of RTA.

There are 4 types of RTA,

Type 3 disease is usually rare and often not included in the classification.

Complications of RTA include stunting of growth, bone problems (rickets in children and osteomalacia in adults), and kidney damage (kidney stones and kidney failure).

The condition is diagnosed by measuring the pH and electrolyte levels of blood and urine. Some other tests like sodium bicarbonate or ammonium chloride loading are also available for the diagnosis.

Renal Tubular Acidosis is treated using alkaline agents like sodium bicarbonate and sodium citrate or potassium citrate. In some cases, treating the cause helps the patient recover from RTA. Vitamin D may be needed in some cases. The condition should be diagnosed early and treatment instituted to prevent complications. Regular monitoring is also necessary in these patients.

Quiz on Kidney
How healthy are your kidneys? Is it possible to lead healthy lives with just a single kidney? Learn more by taking part in this ...

Anatomy of Urinary System - Animation
Animation & slides showing anatomy of urinary system and the role of kidneys in getting rid of the waste products and excess fluid from our body to keep us healthy.

Rickets
Encyclopedia section of medindia explains in brief about Rickets

Diet for Kidney stones
Diet for kidney stone should comprise of calcium-rich foods, increased fluid intake. Other dietary recommendations depends on the type of kidney stone.

Kidney Stones in Children
Increase in salt concentration in the urine results in precipitation of crystals and these lead to formation of kidney stones. Drinking a lot of water can prevent kidney stones.

Kidney Transplantation - Causes of Renal failure
Kidney transplantation is the transfer of a healthy kidney from one individual (donor) to another (recipient) through a specialized surgery.

Kidney Stones
A kidney stone is a solid mass made up of tiny crystals and may appear in any area of the urinary system.
Sign up for Wellness Consult a Doctor Sign up for Selfcare
Advertisement
Health Topics A - Z
A B C D E F G H I J K L M N O P Q R S T U V W X Y Z

Indian Medical Journals The Essence of Yoga Drug Interaction Checker Color Blindness Calculator Loram (2 mg) (Lorazepam) Noscaphene (Noscapine) Turmeric Powder - Health Benefits, Uses & Side Effects How to Reduce School Bag Weight - Simple Tips Find a Hospital Find a Doctor
This site uses cookies to deliver our services. By using our site, you acknowledge that you have read and understand our Cookie Policy, Privacy Policy, and our Terms of Use