is a rare blood type in which the affected individuals have an H antigen deficiency.

Bombay blood group is a rare blood type that was first discovered in a patient of Bombay, now called Mumbai. It is a rare condition and has been reported in 1 of 10,000 individuals in India and 1 in a million people in Europe. 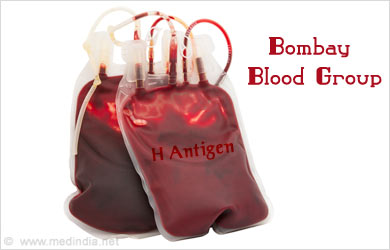 People with Bombay blood group appear that they have an O blood group; however, they suffer from a reaction if they are transfused with any other blood group including O blood.

Why does this happen? This happens because the person lacks an antigen called the H antigen. The H antigen is a precursor protein that gives rise to the A and B antigens, on the basis of which people are classified into the A, B or AB . Normally, people with the O blood group do not convert H to A or B. Thus, they have large amounts of H antigen. On the other hand, people with Bombay blood group have the O blood group, but have one difference - they do not have the H antigen. They are said to have the Oh blood group and are described as h/h. Some of these individuals can make a small amount of H antigen, which appears in the secretions. These people are said to have the para-Bombay phenotype.

It is also important to remember that people with Bombay blood group can donate blood only to those of this group.

Some tips to remember if you have Bombay blood group:

Finally, the presence of the Bombay blood group does not mean that you suffer from any illness. It just means that you are a little different. In fact, it also means that you are special, for you can help some individuals whom many others may be unable to help.

HI....one point i want to share.. A person can donate this blood group only once in 3 months and this Blood group can not be stored for long periods of time.

Is there any possible diseases that caused due to this blood group?

Blood Donation
Blood donation is a process of any consenting adult voluntarily agreeing to have his/her blood drawn for medical use. Know more about blood donation and how you can become a volunteer..

Blood Groups
The blood group of a person is determined by the presence or absence of certain inherited antigenic substances and certain acquired antibodies in blood.

Test Your Knowledge on Blood Groups
Blood group of a person is determined by the presence of certain proteins (antigens) on the surface of the red cell. Knowing your blood group and Rh type is very important. Take this quiz and test your knowledge on blood ...
Sign up for Wellness Consult a Doctor Sign up for Selfcare
Advertisement
Health Topics A - Z
A B C D E F G H I J K L M N O P Q R S T U V W X Y Z