Alcohol Effects on the Body

Alcohol Effects on the Body

Alcohol can affect the body both in moderate doses and excessive doses. Alcohol, specifically ethanol, acts as a potent depressant especially of the central nervous system (CNS). 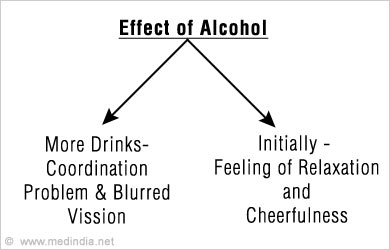 The disinhibiting effect of alcohol is one of the main reasons it is used for social occasions. Alcohol has a biphasic effect, as its effects change over a period of time. First few drinks produce a feeling of relaxation and cheerfulness. Further consumption may lead to blurred vision and coordination problems.

Alcohol even in small doses can significantly impair the judgment and coordination to drive a car safely.

Hangover: Excess consumption can results in a hangover when you wake up the next morning. The feeling of a hangover is associated with severe headache, nausea, lethargy, depression and thirst. There may also be increased sensitivity to light and noise and inability to get out of the bed. The main culprit of hangover is acetaldehyde in the blood  the breakdown product of alcohol.

Alcohol can also lead to dehydration and it is not unusual to wake up in the middle of the night for drinking water. The typical feature of alcohol consumption depends on the amount consumed. Small to moderate amount cause euphoria, Lethargy and Confusion. Excessive intake can cause stupor, coma and even sometimes death.

Many factors including age, amount of consumption, alcohol content in the beverage, weight and gender of the person drinking determine the level of intoxication. When alcohol is consumed in excess it begins affecting all the vital organs of the body and can also lead to .

Weight and Alcohol Consumption: It must be noted that alcohol has the ability to increase the weight of a person although it lacks fat content. This is because it splits into fat and acetate once it enters the digestive pathway and contributes empty calories to the system. Excessive drinking in diabetics can be a disastrous as it can reduce sugar levels dangerously.

Cirrhosis and alcohol consumption: Cirrhosis of liver is a chronic progressive disease where the normal liver cells are replaced by scar tissue and this results in loss of functioning liver cells. Alcohol consumption is a major cause of cirrhosis in the world. Liver Cirrhosis is the 12th leading cause of death in United States and accounts for 1.1 percent of all deaths. In an interesting research publication of Bellentani and Tiribelli (2001) found that "a lifetime alcohol ingestion of 100 kg of undiluted alcohol" can cause cirrhosis. In terms of daily drinking this translates into an average daily consumption of 30 grams of alcohol i.e two and three drinks for a period of 10 years. The risk is lowered if food is taken along with alcohol. Other studies have found that women have a higher risk of cirrhosis than men when the same amount of alcohol is consumed.

Alcohol and Pregnancy: Mothers, who drink , can give birth to infants with . Additionally research indicates that children of alcoholics have a greater risk of becoming alcoholics compared to other children.

Smoking and Alcohol: Smoking and alcohol go together on social occasions and it is possible that there maybe a synergistic effects of both the compounds in producing certain types of cancers including breast cancer in women. Alcohol and tobacco account for over 80% of the cancers of the mouth, pharynx, larynx, and esophagus in the United States. Approx 80% people who drink also claim to smoke regularly. In a study published in Clinical & Experimental Research it was found that cigarette smoking can both exacerbate alcohol-induced damage as well as independently cause brain damage.

Paradoxically moderate amounts certain types of alcoholic drinks appear to have health benefits too. There are studies that indicate that the antioxidants and phenolic compounds in alcoholic beverages (especially red wine) are better absorbed or become more biologically active in the presence of alcohol.