Medindia » Lifestyle and Wellness » Can You Cope with Your Children's Tantrums?

Physical discomfort or an emotional outburst may cause a toddler to throw a tantrum. This may come out of the blue and take you completely by surprise. What needs to be understood here is not every show of anger or insolence is a tantrum. The occurrence is unpleasant for both the toddler and you. Read on about some situations that would help you understand why toddlers throw tantrums, how to handle these situations, and the age at which when children throw most tantrums. 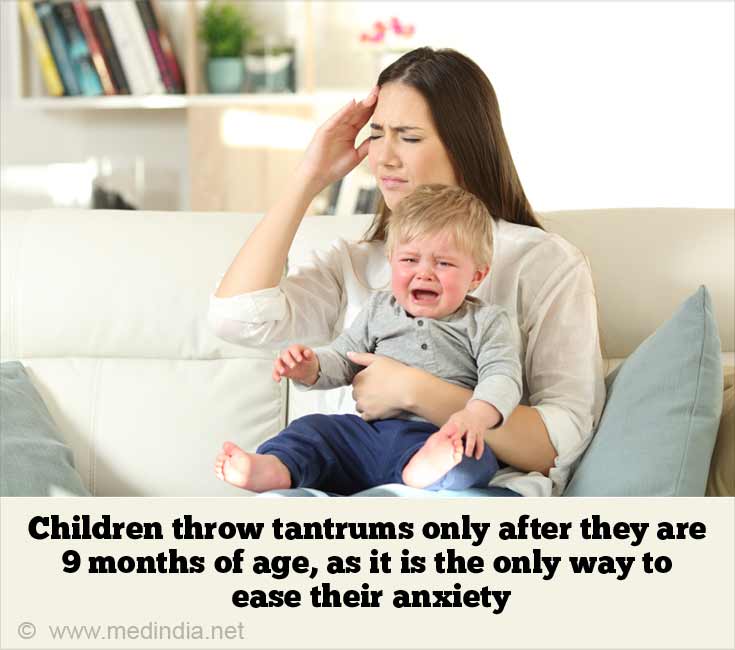 When Do Tantrums Start? When Do They Stop?

Children throw tantrums only after they are 9 months of age, and get into the mode of springing fully blown episodes when they are 10 months to 4 years old. Parents who have failed to pay attention to their childs behavior and daily routine can be in for a shock at the state of affairs, but they have only themselves to blame for not having spent more time with the child. A child can continue to behave badly beyond the age of 4 years, in which case, a different approach is taken to handle outbursts.

Why Do Toddlers Throw Tantrums?

Even the most well-behaved baby can have a bad day and make things difficult for its parents. Your child is exploring the world around him with all his senses. Hes trying to master his environment and failure to achieve results may lead to venting frustrations, and hence throwing a tantrum. For the child, it is the only way to ease its anxiety. There could be many causes behind your babys tantrums, but theres nothing that cannot be handled. The primary reasons for tantrums are:

Latest Publications and Research on Can You Cope with Your Childrens Tantrums?

Exhibiting Extreme Tantrums may Signal Psychiatric Disorder in Kids A new study has found that such kids might be exhibiting early signs of psychiatric disorder.

All about Kiddie tantrums Kids can be both sweet and cunning. Don't fall under their trap for they know exactly how to manipulate things and make you dance around their little fingers. 'Kiddie Power' is at its highest so be sm......

Child Behavior Disorders Behavioral problems occur in children for various reasons including stress, abuse or inconsistent parenting. They must not be mistaken for misbehavior which children are prone to from time to time.

Tips for Parents While Administering Medicines to Children Administering medications to children can be challenging for parents. Parents need to use strategies or creative ideas to convince the child to take medicine.
Sign up for Wellness Consult a Doctor Sign up for Selfcare
Advertisement
Health Topics A - Z
A B C D E F G H I J K L M N O P Q R S T U V W X Y Z

Worst Mistakes Parents Make When Talking to Kids
View all
Advertisement
Can You Cope with Your Childrens Tantrums? - Related News
Extreme Tantrums Could Lead to Depression in Children
Exhibiting Extreme Tantrums may Signal Psychiatric Disorder in Kids
New Tool Indicates When to Worry About Kids' Temper Tantrums
More News