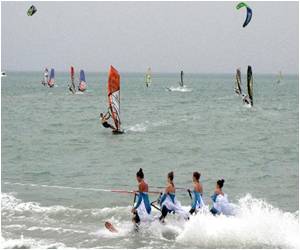 Isolated ex-Soviet Turkmenistan, better known for its inhospitable desert plains than beach breaks, this month welcomed an unlikely group of visitors: a sun-tanned crop of the world's top windsurfers.

Bordering Iran and Afghanistan, the energy-rich Central Asian country played host to a leg of the windsurfing World Cup at a sparkling new Caspian Sea resort that authorities hope can turn the once hermit state into a water sports hub.

International competitors bobbed and weaved through the foaming surf as their sails glistened in the sweltering heat -- an unfamiliar sight in a nation that until 2006 was cut off from the rest of the world by the eccentric two-decade rule of former dictator Saparmurat Niyazov.


"This is such a chance for me!" said a joyous Orazmyrat Arnamammedov, one of only a handful of windsurfers in Turkmenistan.

"It's happiness for me to take part in a competition with sportsmen who are known around the world," the 32-year-old sports instructor told AFP.
Advertisement
Turkmenistan is on a drive to promote itself as a destination for sports, adventure travel and even beach holidays in a bid to boost tourist numbers from the current 15,000 visitors per year.

"Holding world-class windsurfing competitions will be a significant step, taking Turkmenistan to a new level," President Gurbanguly Berdymukhamedov said at the opening of the Turkmenistan PWA World Cup windsurfing event.

Next year the country will host the world championship in belt wrestling -- a traditional form of the sport -- in November and the 2017 5th Asian Indoor-Martial Arts Games.

"Sports and travel are the new trend for international tourism in Turkmenistan," said an official in the state tourism committee who asked not to be named.

The sprawling Caspian Sea town of Avaza, which hosted the windsurfing competition from its 16 kilometres of beach, is a key part of that plan.

By 2020 Ashgabat hopes to transform the desert resort, whose name means "singing wave" in Turkmen, into a vast complex that can compete with Turkey's huge southwestern sea resort of Antalya.

"Avaza has every chance of becoming a major attraction for tourists, both from neighbouring countries and also from overseas," Berdymukhamedov said recently.

"In this part of the Caspian, the water is exceptionally clean and there are good beaches and a mild climate."

Since work started in 2007, six hotels and other accommodation for some 7,000 visitors has been built by mainly Turkish firms at a cost of around $2 billion (1.5 billion euros).

But the resort -- where US pop star Jennifer Lopez was jetted in to perform last summer -- is set to grow into a vast complex with at least 60 hotels, as well as sanatoriums, rest homes, cottages and camp sites, that the the state tourism committee boasts will be "up to world standards".

An artificial river runs through the town and a new airport has been opened in the nearby city of Turkmenbashi.

A winter sports stadium with an ice rink and a 2,000 seat Palace of Congress are also in the pipeline, with the total price tag for the development expected to hit $7 billion.

But some locals are not convinced that the Turkmen resort can bring in the crowds.

A week's package holiday for international visitors costs around $1,500, said Mukhamet Begliyev, who works at a private travel agency.

"Even if someone rich enough turns up, what do we have to offer except the sea and the hotels? The entertainment sphere isn't developed at Avaza at the moment," Begliyev said.

The "international" airport in Turkmenbashi so far only accepts domestic flights and getting a visa to the country is still a major hurdle.

For the moment that means the resort is largely attracting domestic holidaymakers, although Turkmenistan's low wages mean it is beyond the means of many.

For 28-year-old Gozel Akhundova from Dashoguz, a city in the country's north, even a brief stay in an Avaza hotel at $70 a night was an expensive treat.

"We'll only spend three days here. If it was cheaper, we'd stay longer," she said.

And the fledgling resort still has a long way to go to compete with more established holiday spots.

"Why should I go to Avaza, when there is Antalya?" asked Akhmet, a 22-year-old student in Ashgabat who said he planned to holiday in Turkey this summer.

"The service is good, there's plenty of fun activities and it's cheap," he said.

Internet Rising in Popularity in Isolated Turkmenistan
Selbi Dzhafarova in Turkmenistan revealed that she and her husband had initially wanted to buy a ......
Veterans Return to the Beaches to Mark D-Day
In an emotional return to mark 70 years since the launch of the biggest amphibious invasion in ......

Russians Parade Up Rio Beach, Hopes of World Cup Melting
As Russian team lost to Belgium, the scores of Russians who paraded up the Rio de Janeiro's ......