Veterans Return to the Beaches to Mark D-Day

In an emotional return to mark 70 years since the launch of the biggest amphibious invasion in military history, D-Day veterans marched back to Normandy's beaches and villages.

Royals, top brass and some 20 world leaders, including US President Barack Obama and Russia's Vladimir Putin, will attend the main D-Day ceremony on Friday, with the diplomatic wrangling over the Ukraine crisis acting as an awkward undercurrent to proceedings.


But on the eve of the anniversary, the spotlight was firmly on those who risked their lives to liberate Europe from Nazism, most of whom are now in their 90s and are marking the occasion for probably the last time.


One of them, Ernest "Ernie" Stringer, spoke of his terror as he piled out of a low-flying military aircraft in pitch darkness.

"It was dark and the planes were coming in very low. We were out and on the ground very quickly," Stringer, who was only 19 on the day, told AFP.

"As it happened we were virtually surrounded but we didn't know that. And they didn't know we were there either!" he added.

Many of those who jumped before him were not so lucky. The man ahead of Stringer hit a wall and broke his arm. Several died on impact, not having time to open their chutes as the planes were flying so low.

As colonel-in-chief of the parachute regiment, Britain's Prince Charles led the tributes to men like Stringer who took part in the first wave, when thousands of Allied troops flew or parachuted in during the early hours of June 6, 1944, catching the German army by surprise.

Wearing a field marshal's uniform, the heir to the British throne chatted at length to veterans, many of whom were confined to wheelchairs, along with his wife Camilla, who was wearing a grey-blue overcoat.

He waved to crowds who applauded as he crossed Pegasus Bridge under a clear blue sky and posed for a group photo with veterans.

Charles and Camilla then hopped into a motor gunboat, one of the lead boats on the approach to Swords Beach on the historic day seven decades ago.

"Did you jump here?" the prince asked paratrooper Raymond Shuck. "And in the right place?" he quipped, in reference to the fact that several parachutists landed in completely the wrong place in the darkness and confusion of the assault.

Charles later oversaw a parachute drop involving British, French, US and Canadian forces including Jock Hutton, a Scottish veteran who at the age of 89 made a tandem jump onto the same spot he landed in 1944.

Wearing a red jumpsuit, Hutton touched down lightly on the grass just in front of the waiting prince, dusted himself down briskly and removed his helmet.

"I was hoping there'd be some Calvados," he quipped on arrival.

"At my age, life tends to get a wee bit boring. So you've got to grab at any chance at excitement," he said.

In the naval base of Portsmouth, in southern England, the departure point for troops heading to Swords Beach, some 80 veterans watched an amphibious vehicle roar off a landing craft onto a beach and Queen Elizabeth II's daughter Princess Anne led a service nearby.

Later on Thursday, a flotilla of ships was due to depart Portsmouth in commemoration of the nearly 7,000 vessels that took part in the invasion.

US, French and Dutch soldiers will also take part at an evening ceremony at Utah beach, on the western edge of the invasion site and there will be fireworks along the coast to mark the first bombing raids.

On Friday, Queen Elizabeth and Obama are among the world leaders attending the international ceremony of remembrance on the beach at Ouistreham.

The 88-year-old queen, who has cut back her engagements recently due to her advancing years, received a warm welcome from hundreds of well-wishers as she alighted at the Gare du Nord in Paris in a cream-white coat and matching hat.

After a quick change into a pink outfit, she took part in a ceremony at the eternal flame at the Arc de Triomphe which marks the grave of the unknown soldier.

Stringer, who was to attend a lunch with Prince Charles, said he had been several times to Normandy but the circle of D-Day veterans was shrinking fast.

"You keep looking for your friends. Always wondering who's missing, because there's so few left." 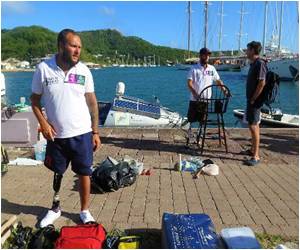 Nearly 1.1 Million Americans Caring for Recently Wounded Veterans
More than 1.1 million parents, spouses and friends are caring for the disabled who have served in the U.S. military since Sept. 11, 2001, often doing so without a formal support network and putting their own well-being at risk.
READ MORE