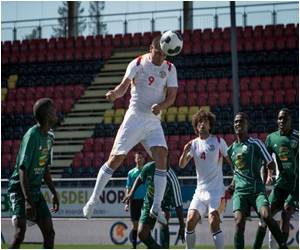 As Russian team lost to Belgium, the scores of Russians who paraded up the Rio de Janeiro's beachfront Sunday in wintry shapka hats, seemed to lose their hopes.

Decked out in red, white and blue, a visibly beach-deprived group of about 100 Russians stood out from the suntanned crowd on Copacabana Beach.

They marched up Rio's iconic Avenida Atlantica before the match, carrying a banner that read "Final World Cup 2014: Russia-Brazil."


That scenario looks increasingly unlikely after the game, which Russia lost 1-0, slipping into a precarious position in Group H.

But fervid Russian fans vowed to follow their team to the end, regardless of Sunday's outcome.

Relatively common and potentially dangerous injuries in the soccer players are the fractures of the nose and other facial bones, reports a Brazilian study.
Advertisement
Alesia Rychagova, a 35-year-old from Saint Petersburg, said that despite the lackluster football, she would travel on to the Amazonian city of Manaus to see Russia's final group stage game against Algeria on Thursday.

"Brazil is the country of my childhood dreams -- samba, Rio, Copacabana, the Amazon," she said. "I'm staying until the end."

As they marched along sunny Copacabana Beach before the match, the Russians belted out football chants and stopped for photographs with other fans from around the world.

The parade drew a large crowd of onlookers, including a reporter from Mexico's Televisa network wearing a bikini top and shorts who was swarmed by enthusiastic Russian fans, who put a shapka on her head and draped her in a Russian flag.

A young boy in a yellow and green Brazil jersey found some welcome shade by riding his tricycle beneath the 30-square-meter (320-square-foot) flag the Russians carried up the avenue.

The Russians then took the subway to Rio's Maracana Stadium, which police surrounded with a reinforced security cordon after ticketless Chilean and Argentinean fans gate-crashed the venue's first two World Cup matches.

The Brazilian government revealed that the competition is also proving to be a success off the pitch after confirming that the country is managing to hit its tourism goals.
Advertisement
<< Ghaziabad Ordnance Factory Worker in Critical Condition Afte...
Midwifery Matters 'More Than Ever', Finds the Lancet >>