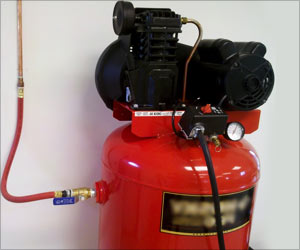 A 30-year-old ordnance factory worker is in critical condition in the hospital after his friend played a practical joke on him in Muradnagar area of Ghaziabad.

The ordnance factory worker was seriously injured after one of his co-workers, also his friend, rushed compressed gas via his rectum into his intestine.

The incident occurred on Thursday and came to light only on Friday.


The victim, Rajendra Singh alias Pintu, was working on contract at the state-owned ordnance factory in Murad Nagar, Ghaziabad.

Thursday afternoon, during a break from work, Pintu was sitting along with his co-workers near the compressor house.
Advertisement
One of his friends and also a co-worker, Ankit, played a practical joke on him by releasing high-pressure air into Pintu's rectum via the air pipe of the compressor, according to the police.

Some co-workers rushed him to the Meerut Medical Hospital.

Doctors reported his condition to be critical as they say the lower part of the large intestine that comprises the sigmoid colon and the rectum has been perforated due to compressed gas.

He was operated upon and was later admitted to the ICU.

Police have registered a criminal case for voluntarily causing hurt by dangerous weapons or means against Ankit, the accused.

Surgeons Remove Gold Bars from Indian Businessman's Stomach
In a bizarre incident, surgeons have removed twelve bars of gold from the stomach of a businessman ....

Research Provides New Hope for Early Detection of Stomach Cancer
Research done at the University of Adelaide has provided new hope for the early detection of ......