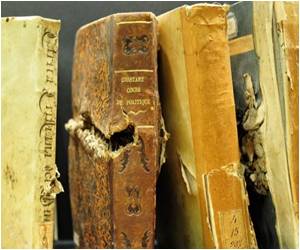 Thanks to a new technology and online crowd sourcing, the world's oldest undeciphered writing system is close to being cracked, researchers say.

Called proto-Elamite, the writing has its roots in what is now Iran and dates from 3,200 to 3,000 B.C. So far, the 5,000-year-old writing has defied any effort to decode its symbols impressed on clay tablets.

Ancient Arabic manuscripts have provided a clue to scientists about past climate, a study reveals.
Advertisement

Now a high-tech imaging device developed at the Universities of Oxford and Southampton in England might provide the necessary insight to crack the code once and for all.


Comprising a dome with 76 lights and a camera positioned at the top of the dome, the Reflectance Transformation Imaging (RTI) is able to capture extremely high quality images of ancient documents.

Writing Exercise: Good for Your Waistline

15-minute writing exercise may help shed your extra kilos in few months, says study.
Advertisement
As the object is placed in the centre of the dome, 76 photos are taken each with one of the 76 lights individually lit.

The 76 images are then joined in post-processing so that the researchers can move the light across the surface of the digital image and use the difference between light and shadow to highlight never before seen details.

"The quality of the images captured is incredible. I have spent the last ten years trying to decipher the proto-Elamite writing system and, with this new technology, I think we are finally on the point of making a breakthrough," Discovery News quoted Jacob Dahl as saying.

Dahl noted that overlooking differences barely visible to the naked eye may have prevented scholars from deciphering the writing.

"Consider for example not being able to distinguish the letter i from the letter t," he said.

The images are now been made available online for free public access on the Cuneiform Digital Library Initiative website.

As high definition images of the clay tablets are shared with scholars around the world, it is hoped that the enigmatic right to left writing will finally be deciphered.

According to the researcher, half of the signs used in this way seem to have been completely invented for the sounds they represent.

"If this turns out to be the case, it would transform fundamentally how we understand early writing where phonetecism is believed to have been developed through the so-called rebus principle. A modern example would be for example 'I see you,' written with the three signs 'eye', the 'sea', and a 'ewe'," Dahl said.

Containing depictions of animals and mythical creatures, but no representations of the human form whatsoever, the tablets appear to have been used only in administrative and agricultural records.

No evidence has emerged for learning exercises for scribes to improve and preserve the writing.

"The lack of a scholarly tradition meant that a lot of mistakes were made," Dahl added.

Children With ADHD Have Increased Risk of Developing Writing Problems

Drinking Beer or Wine Every Day Could Cause Age-related Diseases
View all
News Archive
News Resource
News Category
How to Decipher a Baby's Cry of Pain? Nurturing Your Financial Well-being Might Slow Down Memory Loss How Microglia Contribute to Alzheimer's Disease? How the Intestine Repairs Damaged Tissue? New Component to Treat Lung Lesions Created
More News
Sign up for Wellness Consult a Doctor Sign up for Selfcare