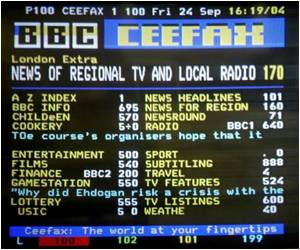 Olympic champion Mary Peters brought the curtain down on the service when she turned off the last analogue TV signal in Northern Ireland at 23.30 local time (2230GMT) as part of the country's switch to digital broadcasts.

BBC Breakfast presenters have blasted a Tory MP who claimed that some of the Corporation's newsreaders were using too much Botox .
Advertisement


"At moments of high pressure -- with little time for detailed examination of the news -- Ceefax headlines offered an instant window on the world," he said.

A live programme from an abortion clinic will feature interviews with women undergoing terminations will be broadcast on radio by the BBC.
Advertisement
"From breaking global news to domestic sports news, Ceefax was speedy, accurate and indispensable," he added. "It can be proud of its record."

The Plain English Campaign honoured the service with a lifetime achievement award for its "clarity" and use of "everyday words".

Its aim was to give viewers real-time access to the information coming into the BBC newsroom.

At its peak in the 1990s, the service boasted 20 million viewers who checked the service at least once a week.

It was particularly popular with sports fans, enabling them to keep tabs on the latest score in multiple fixtures.

Olympic hero Sebastian Coe said Ceefax had been "an invaluable news service for every sports fan over the last 38 years.

"I have checked in on many a sports news story, track and field triumph and, of course, Chelsea results!"

BBC has sparked controversy by naming a giant panda named Sweety among 12 females in its 'Faces of 2011' list.
Advertisement
<< Researchers Manage to Replace Genetic Mechanism That may Ca...
US Energy Drink Linked With Possible Deaths >>