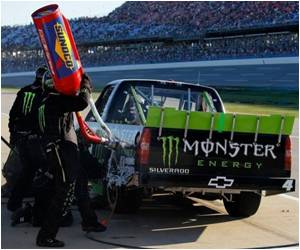 An agency spokeswoman said that the US Food and Drug Administration is investigating five deaths and a heart attack for possible links to consumption of Monster Energy drinks.

"I can verify that FDA has received five adverse event reports of death and one of heart attack possibly associated with Monster Energy drink," the FDA spokeswoman, Shelly Burgess, said in an email.

Burgess cautioned that such reports "serve as a signal to FDA and do not prove causation between a product or ingredient and an adverse event."


But she said such reports are taken seriously and diligently investigated by the agency, which regulates the US food and drug industries.

Burgess urged consumers who have experienced an adverse reaction to an energy drink to notify the manufacturers, which are required to report them to the FDA within 15 days.

Energy drinks exert positive benefits on heart, finds research.
Advertisement
The family of US teen Anais Fournier, who died of an arrhythmia in December 2011, allegedly after drinking two cans of Monster Energy over a 24-hour period, brought suit Friday in California against Monster Beverage.

Her parents accused the company of not warning consumers of the potential dangers of its product.

"I was shocked to learn the FDA can regulate caffeine in a can of soda, but not these huge energy drinks," said Wendy Crossland, the girl's mother, who called the beverages "death traps" for adolescents.

According to the complaint, the two cans of energy drink that Fournier consumed contained about 480 milligrams of caffeine -- the equivalent of 14 Coca-Colas.

"Monster does not believe that its products are in any way responsible for the death of Ms. Fournier and intends to vigorously defend the lawsuit," it said in a statement.

"Neither the science nor the facts support the allegations that have been made. Monster reiterates that its products are and have always been safe."

A November 2011 report by the US Department of Health and Human Services found a tenfold spike in emergency room visits for issues linked to energy drinks between 2004 and 2009, totaling more than 16,000 visits in 2008, with sales of the beverages skyrocketing during that same period.

Information about the report was released in a statement from Kevin Goldberg, a lawyer representing Fournier's family.

The firm Beverage Digest estimates that the sales of energizer drinks -- which represent three percent of the soda market -- rose some 17 percent in 2011.

Monster holds nearly 39 percent of the US market in sales volume but Austria's Red Bull has the highest share in terms of revenues. Other makers of these types of drinks are PepsiCo and Living Essentials LLC.

Aggressive marketing campaigns by such companies targeting susceptible youngsters have led to growing concern among authorities.

In August, federal prosecutors in New York summoned officials from Monster, PepsiCo and Living Essentials as part of a probe into the industry's advertising and marketing practices.

Energy drinks contain stimulants like caffeine, guarana and ginseng as well as the relaxant taurine and other vitamins.

Combination of Alcohol and Energy Drinks may Lead to Abnormal Heartbeat

A new study conducted by researchers at University of Tasmania has found that combining alcohol with energy drinks may not be good for the health.
Advertisement
<< World's Oldest Teletext Service Ceased
Key Symptoms For Embolism Is Same As Heart Attack >>