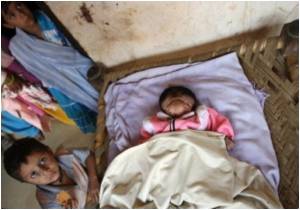 Months after having a baby girl, the world's oldest mother is critically ill and nearing her death.

Rajo Devi Lohan, 72, though too weak from complications after her controversial IVF pregnancy, is still the happiest mother in the world.


"I dreamed about having a child all my life. It does not matter to me that I am ill, because at least I lived long enough to become a mother," The Sun quoted Lohan as saying.


Rajo Devi is bedridden, too weak to speak or even lift the little girl after giving birth to her at 70.

She and her husband are uneducated farmers who did not realize the risks of having a baby at such an old age.

"The doctor never warned me it was dangerous to have a baby at my age. But I was healthy before, and now I am very sick," she admitted.

After the Caesarean birth, Lohan suffered severe internal bleeding when her womb ruptured, and had to undergo another surgery to remove an orange-sized cyst on one ovary - the two operations have left her body too torn to recover.

Added to that, she ignored the doctors' advice to take bed rest.

Now, her sister Omi looks after her little girl, Naveen who is 18 months old.

The couple is not worried about the girl, as they know their relatives will take care of her.

The doctor, Anurag Bishnoi, who treated Lohan, has said that her problems are unrelated to giving birth at such an old age.

"Even though Rajo's health is deteriorating, at least she will die in peace. She does not have to face the stigma of being barren," he said.

Peter Bowen-Simpkins, medical director of London Women's Clinic, said: "Any woman over 70 putting their body through the rigours of birth is endangering themselves."

Late Pregnancy may be Risky for Mothers
Women who have their first baby at an advanced maternal age may be more at risk of complications, says a recent UK study.
READ MORE