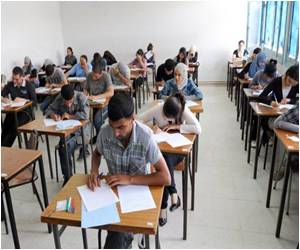 City Montessori School in the Indian city of Lucknow - largest and one of the most respected educational establishment in the world with 39,437 registered pupils in the 2010-2011 academic year.

The school says that enrollment numbers have already risen above 45,000, with 2,500 teachers, 3,700 computers, 1,000 classrooms -- and one of the hardest first eleven cricket teams to break into.

CMS, as it is known, was opened by Jagdish Gandhi and his wife Bharti in 1959 with a loan of 300 rupees ($6 at current rates) and just five pupils.


Today it sprawls over 20 sites in Lucknow, the capital of Uttar Pradesh state, and is as famous for its exam results and international exchange programmes as for its scale.

Decline in HIV Deaths for Most Men, Women by Race/ethnicity, Education Found By Study

According to a report, overall death rates due to HIV infection declined over time between 1993 and 2007 for most men and women by race/ethnicity and educational levels.
Advertisement
"The phenomenal growth of our school is a reflection of our efforts to please our parents with our service to their children," said Gandhi, who is still involved in the school's management at the age of 75.

"Our students have exceptional academic results each year and outstanding global exposure. Getting this Guinness record is heartening but it's not just about size," he told AFP.

The pupils, who are aged between three and 17, all wear uniform and each class has about 45 members, but the whole school never gathers for assembly as there is nowhere big enough to hold them.

CMS, which receives no government funding, charges 1,000 rupees a month in fees for younger pupils, rising to 2,500 a month for seniors.

"In such a large school, there are many advantages, one being you get to make a lot of friends across the many sites that we have," Ritika Ghosh, 14, who has been at CMS for two years, told AFP.

"But as the school is so huge it takes a lot of effort to get noticed. Otherwise you are just one of the thousands that study.

"There are certainly more challenges and competitions, which in the end prepares us for real life."

Fellow pupil Tanmay Tiwari, 16, credits the large size of the school for making him more outgoing.

"I used to be very shy but the school has given me that confidence," he told AFP. "Now I am in the college team, debating in national competitions."

The school's size is matched only by its idealistic ambitions, with pupils taught a philosophy of universal peace and globalism under the motto "Jai Jagat" (Victory be to the World).

With pupils under fierce pressure to get good exam results, sport is not always a top priority, but cricket coach Raju Singh Chauhan says selecting a team is still tricky.

"To fish out sports talent in the 45,000-plus students can be a huge problem," he said.

"For this reason we hold inter-branch competitions to dig out the best children and then eventually we get the bigger picture and our best eleven for the team."

CMS first held the title of the world's biggest school in 2005, when it had 29,212 pupils, beating the previous record holder, the Rizal High School in Manila, Philippines, which had 19,738 pupils.

Alumni include Ushhan Gundevia, an executive banker at Goldman Sachs, and Prakash Gupta, a senior United Nations diplomat in New York, as well as Harvard scholars and several leading surgeons and scientists.

"The school is an inspiration not only to the pupils, but also to anyone, anywhere who wants to make a positive difference," Craig Glenday, editor-in-chief of Guinness World Records, told AFP from London.