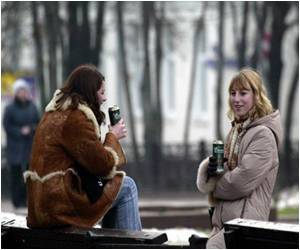 11 alcohol-dependent volunteers received two daily doses of an oxytocin nasal spray or a placebo during the first three days of a detox programme, conducted by Cort Pedersen at the University and his team.

The volunteers were also given lorazepam - a detox drug - when their withdrawal symptoms reached a specific level.


The researchers found that the oxytocin group had fewer alcohol cravings and milder withdrawal symptoms than the placebo group, and used just one-fifth of the lorazepam.

Alcohol consumption for recreation and relaxation has become a universal culture. But do you think you know enough about this drink - Take this quiz and find out.
Advertisement
"Four [oxytocin] volunteers didn't need any lorazepam at all," New Scientist quoted Pedersen as saying.

This is good news as lorazepam is highly addictive. While it reduces anxiety and seizures during alcohol withdrawal, users can experience insomnia and cravings when they come off the drug.

How oxytocin helps to aid withdrawal is still unclear, but it has no known side effects.

And Pedersen hopes that alcoholics who take the hormone will be less likely to experience the unpleasant symptoms that can lead to relapse.

More News on:
Alcoholic Liver Disease Alcoholism Pancreatitis Sexual Intercourse Facts Flowers And What They Mean To Us Understanding the Role of Love in Mental Health