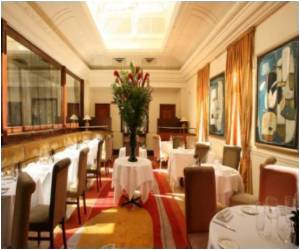 Noma hit the headlines last year when it deposed famed Spanish restaurant elBulli from the top spot it had held for four years. ElBulli was not included this year because it is closing later this year.

A new study has found that two factors come into play while deciding a restaurant you would like to go back to - the social experience and the availability of healthy menu options.
Advertisement

Serving up Nordic specialities in a converted 18th-century shipping warehouse, Noma has become a favourite of gourmets worldwide for using seasonal and local ingredients.


"It has been a momentous year for Noma and chef Rene Redzepi?s name has become synonymous with the ?new guard? of global cuisine; a shorthand for young, exciting, destination-led dining," a Restaurant Magazine spokesman said.

A new survey has found that even though most of the restaurant workers were trained in general food services, only about one-third had undergone any specific food-allergy training.
Advertisement
Next on the list after Noma were two Spanish restaurants: El Celler de Can Roca, which is run by three brothers, the youngest of them only 33; and Mugaritz, which came third despite a devastating fire in 2010.

This year's winner of the Chefs' Choice award, which is voted for by chefs, was Massimo Bottura from Osteria Francescana in Italy.

"Massimo is rapidly gaining an international reputation for his avant-garde cuisine which although unashamedly modern, reflects traditional techniques and always pushes the boundaries of what?s new," the spokesman said.

Nihonryori RyuGin restaurant in Japan climbed 28 places to reach number 20 in the list, and the judges praised chef Seiji Yamamoto for pushing the boundaries of Japanese cuisine without upsetting traditionalists.

Les Creations de Narisawa, an unorthodox French restaurant also in Tokyo, was named best in Asia for the third year in a row and is at number 12 on the list overall.

Quay restaurant in Sydney was declared as Australasia's best for the second year in a row, finishing at number 26 in the worldwide rankings.

Australian-born chef Brett Graham was recognised for his work at The Ledbury in London, which was the list's highest new entry at number 34.

Africa's best restaurant title went to Cape Town's Le Quartier Francais while Swedish restaurant Frantzen/Lindeberg, which contains just 16 seats, was named as the "One to Watch".

There are several new entries this year that broaden the geographic reach of the awards: Amber in China (37), Astrid Y Gaston in Peru (42), Varvary in Russia (48) and Pujol in Mexico (49).

Restaurant diners in the United States will now get to see how much calories they are chomping down
Advertisement
Advertisement
This site uses cookies to deliver our services.By using our site, you acknowledge that you have read and understand our Cookie Policy, Privacy Policy, and our Terms of Use  Ok, Got it. Close
×