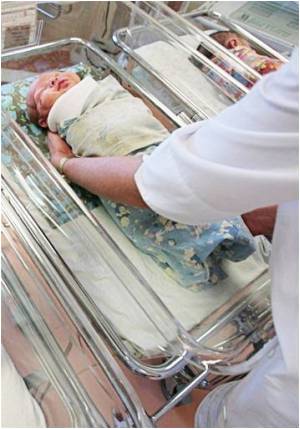 Abnormalities caused in the airways are uncommon among well-appearing babies hospitalized with life threatening conditions. Pediatric otolarynology service if of low yield in this population, reveals report submitted in Archives of Otolaryngology Head & Neck Surgery.

An apparent life-threatening event (ALTE) is defined as "an episode that is frightening to the observer and that is characterized by some combination of apnea (central or occasionally obstructive), color change (usually cyanotic or pallid), marked change in muscle tone, choking, or gagging," the authors write as background information in the article. "Otolaryngology evaluation has been suggested by some for the workup of patients with an ALTE."

Life Saving measures in any emergency situation are described under the acronym ABCD. "A" stands for airway. Unless the airway is patent breathing (B) will not be adequate or possible.
Advertisement

Mark W. Willis, M.D., and colleagues at the University of Utah School of Medicine, Salt Lake City, conducted a retrospective observational study to determine how often the pediatric otolaryngology service is involved in the initial care of infants with an ALTE. They assessed the usefulness of bronchoscopy and laryngoscopy (examination of the breathing passages and voice box with a lighted instrument) in diagnosing the underlying cause, and followed up the patients' outcomes over five years.


Among 471 infants with an ALTE who were included in the study, nine subsequently underwent airway evaluation by bronchoscopy, laryngoscopy, or both. Three were referred during their initial ALTE admission, and six were seen later in childhood.

Obstructive sleep apnea should be suspected in overweight middle aged adults who snore loudly and which can cause interruption of breathing for 10 seconds or more and this results in reduced blood o
Advertisement
"Five of nine patients had normal findings, three patients had laryngomalacia [a soft floppy voice box] (including two with laryngeal edema), and one patient had adenotonsillar hypertrophy [enlargement of the tonsils and adenoids]," the authors report.

"Despite the low rate of initial airway evaluation, we found no evidence of detrimental outcomes caused by a delay in referral during the ensuing five years," the authors conclude. "The results of this study suggest that pediatric otolaryngology evaluation is of low yield in well-appearing infants hospitalized for an ALTE."

A study conducted by researchers at Duke University has found that changes that occur in the airways of asthma patients are in part caused by the naturally occurring protein interleukin-13
Advertisement
Advertisement
This site uses cookies to deliver our services.By using our site, you acknowledge that you have read and understand our Cookie Policy, Privacy Policy, and our Terms of Use  Ok, Got it. Close
×