World Gay Rugby Championships To Be Held In Sydney 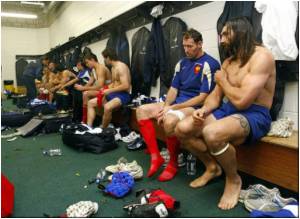 Australia has won its bid to host the world's rugby championships in Sydney in 2014. The organizers hope that the event will help to address homophobia in sport.

The Sydney Convicts Rugby Club, Australia's first gay rugby union team, said the International Gay Rugby Association and Board had announced it had the rights to host the seventh bi-annual Bingham Cup.

Is there a shift in social attitude towards homosexuals and HIV infected people in India. Find out about this and other aspects in an exclusive interview with Anjali Gopalan of Naz Foundation, Delhi.
Advertisement

"When the Bingham Cup is played in Sydney it will further dispel the myth that gay men cannot play tough contact sport," head of the Sydney bid committee, Andrew Purchas, said.


"The tournament will shine a national spotlight on homophobia in sport, which is still endemic to many of our country's sporting fields and experienced by young gay athletes."

Homoesexuality (or) Same Sex Love is the hottest most discussed human trait. There has been a hunt for a Gaye gene in order to lend credibility to a growing cause.
Advertisement
Officials said that the wide support in sports-mad Australia -- from Prime Minister Julia Gillard down -- for the tournament was remarkable and highlighted Australia's willingness to tackle homophobia on the pitch.

"In many respects the Bingham Cup is more than just a rugby tournament," said former Wallaby captain and supporter of the Sydney bid John Eales.

"It is an important demonstration of mutual respect and diversity which has always been part of the rugby community.

"Regardless of the football code you would like to play, sexuality should be irrelevant consideration.

"Unfortunately this is not a reality and there is still work to be done to eliminate negative stereotypes and homophobia in sport".

The Bingham Cup is named after American gay rugby player Mark Bingham, who died on United Airlines Flight 93 when it crashed into a Pennsylvania field during the September 11, 2001 attacks in the United States.

The Sydney Convicts Rugby Club, winners of the 2012 Bingham Cup, led the bid to host the week-long event which will see up to 40 teams and 1,500 players, coaches and supporters visit Sydney.

Marriages (read heterosexual) are made in heaven, they say. But what about homosexual partnerships? Are they made for each other?
Advertisement
<< "Heaven Is Real" Claims Harvard Neurosurgeon
Smoking Elevates The Risk of Age-related Cataract >>