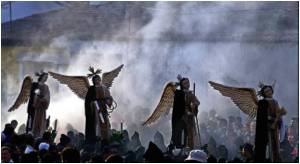 A Harvard neurosurgeon has claimed to have visited heaven when he slipped into a coma after acquiring a very rare disease.

Dr. Eben Alexander who has taught at Harvard Medical School and other universities, spent his life countering claims of heavenly out-of-body experiences and refuting such discussions with scientific logic, until he himself had a near-death experience.

Near Death Experience - An Indian Forum

Near Death Experience (NDE) is perhaps the closest one can come to take a peek into the vast void beyond life. It is perhaps like the black hole of our mother universe
Advertisement

He is now telling the world that heaven is real and afterlife exists in his new book, "Proof of Heaven."


Alexander, a Christian, claims he took the journey to the afterlife when he slipped into a coma in 2008 after contracting bacterial meningitis.

His tale is the cover story on Newsweek's latest issue, which features the headline, "Heaven Is Real: A Doctor's Experience Of The Afterlife," the Huffington Post reported

Meninges are the three layers of membrane that cover the brain and infection of the cerebrospinal fluid between them causes meningitis the disease of the meninges.
Advertisement
Alexander describes the heaven he saw over the course of seven days in a coma in an article for the Daily Beast, a Newsweek affiliate.

"Toward the beginning of my adventure, I was in a place of clouds. Big, puffy, pink-white ones that showed up sharply against the deep blue-black sky," he wrote.

"Higher than the clouds-immeasurably higher-flocks of transparent, shimmering beings arced across the sky, leaving long, streamerlike lines behind them," he continued.

Alexander said that he traveled through this heaven, surrounded by "millions of butterflies," with a woman.

This woman gave him three messages: "You are loved and cherished, dearly, forever," "You have nothing to fear" and "There is nothing you can do wrong."

After the neurosurgeon awoke from the coma, he penned the book, "Proof of Heaven," describing his journey.

Coma is a deep state of unconsciousness where the affected individual is alive but is not able to react or respond to external stimuli. The outcome ranges from full recovery to death.
Advertisement
<< Treating Sleep Apnea Could Lower Blood Pressure in Men
World Gay Rugby Championships To Be Held In Sydney >>