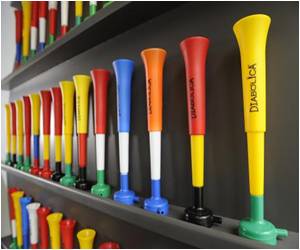 In a case of art mirroring life, a pavilion designed by a prize-winning architect to celebrate the World Cup is still not ready, just days before the first ball is kicked.

Shigeru Ban's cardboard construction in the grounds of the Brazilian embassy in Tokyo was due to be finished on Monday.

But ferocious downpours that have pounded Japan in the past few days in a particularly severe start to the rainy season have prevented work on the pavilion. Press who turned up for the preview on Tuesday were treated to the sight of a job half done.


Undeterred, Ban, who is to receive the Pritzker Prize 2014 in Amsterdam on Friday, was at the embassy to explain to journalists his pride in the construction, made of recycled fibreboard tubes.
Advertisement
"The size of the project does not determine the importance," he told AFP.

With just days to go before the opening match in Brazil, workers there are racing to finish the stadiums and infrastructure the tournament will use.

When an AFP team last weekend visited Sao Paulo's new Corinthians Arena where Brazil will take on Croatia on Thursday, the finishing touches were still being put to the stadium.

Ban has made a name for himself creating temporary buildings from cardboard and other readily-available materials, especially for deployment in disaster zones.

He has previously helped provide shelter for victims of Typhoon Haiyan in the Philippines, created a church after the 1995 earthquake in Kobe and built a temporary cathedral in Christchurch, New Zealand, after the stone original was flattened by a quake.

He also built temporary classrooms with paper columns for children hit by the Sichuan earthquake in China in 2008.

But he makes no secret of the fact that he also takes commissions from clients, some of them wealthy.

"I have to make some money," he said.

He is determined that the Pritzker Prize -- sometimes called the Nobel of architecture -- will alter nothing about his philosophy and his work.

"I do not need to change," he says. "I will continue to do the same thing, working in disaster areas as well as for the privileged. And I shall continue to teach.

"I do not want to change, even though it is such an important award."

The pavilion is expected to be finished on Wednesday, and will be open to the public throughout the World Cup.

Ban will be in the Netherlands later this week for the prize ceremony, where he will receive a bronze medallion and a $100,000 grant.

He is the second successive Japanese winner of the Pritzker, which was won in 2013 by Toyo Ito.

Own Homes on Display by World's Top Architects
The international design fair this week included the features of homes of leading world architects ....