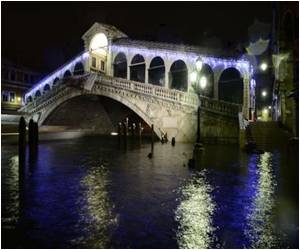 As Star designer Rem Koolhaas prepares to unveil the programme for Venice's architecture Biennale, he said that adapting to architectural modernity can be a "painful process".

The Dutch designer is curating this year's programme, which will look back over the past 100 years of innovation.

Venice, the charming city of canals, will probably drown by three inches over the next 20 years.
Advertisement

"I suggested that it would be interesting to look at the last century, to look from 1914 to 2014 and I've called that theme 'absorbing modernity'", said Koolhaas, who is known for his extravagant designs.


The Biennale, which is held every two years, is officially entitled "Fundamentals" and opens on Saturday, with 65 countries taking part including 11 for the first time.

Carnival of Venice Launched by 'Flight Of The Angel'

Traditional opening of the Carnival of Venice marked by the Flight of the angel , with more than 100,000 revelers dressed in masks and period costumes packed into St Mark's Square.
Advertisement
"I realised that modernisation is a very often painful process but that somehow every nation in the last 100 years has been forced to modernise itself," said Koolhaas, who is known for his research and designing a series of signature projects around the world.

Paolo Baratta, director of the Venice Biennale, said the 2014 edition would be about architectural "research" not just in an academic sense but also in the sense of "what we are capable of demanding from architecture".

The Biennale will last until November.

In Venice, fifty-two drawings by Renaissance genius Leonardo da Vinci are going on show, including the famous but rarely-seen Vitruvian Man charting the ideal proportions of the human body.
Advertisement
<< At 89, D-Day Parachutists Says, Life Gets Boring
Ban of Alcohol at Gallipoli Service, Turkey Backs the Bill >>