Own Homes on Display by World's Top Architects 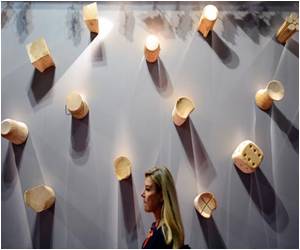 The international design fair this week included the features of homes of leading world architects - with eye-catching objects such as indoor trees, red walls and stair bookcase.

Among the big names in attendance were US architect Daniel Libeskind, Italy's Massimiliano Fuksas and Japan's Shigeru Ban -- winner of this year's prestigious Pritzker Prize, known as the "Nobel prize of architecture".

"If I had to describe my apartment in three words they would be tree, tree and tree again!" a smiling Shigeru Ban said of his home in the suburbs of Tokyo at the sprawling Salone del Mobile in Italy's business capital.


Rather than cut down the trees already on the site, Ban used them to create "wells" in the building, he said.

Curator Francesca Molteni told AFP the aim of the project -- entitled simply "Where Do Architects Live?" -- was "not to spy in their rooms" but to understand "what each culture means by the word 'living'".
Advertisement
"For an architect, every home is a world," she said.

Brazilian architect Marcio Kogan's house in Sao Paulo has a large window "open on the chaos of the city".

Fuksas and his wife Doriana, a fellow architect, have an apartment on the Place des Vosges in Paris which she said she found inspirational because "it looks out over trees, like a carpet" that changes with the seasons.

Milan-based Mario Bellini offered up a signature detail of his house -- a giant nine-metre (30-foot) high staircase lined with books to save space.

"You are basically climbing over thousands of books and records. You distract yourself, you pick them up, you open them. All my photos are there too," he said.

"Every time it's a little journey through my story and what I love," he said.

Libeskind, who is rebuilding the World Trade Center in New York, said he has a red wall in every room of his apartment as "a symbol of conscience and dynamism".

Designing a house "is not just for the next fashion magazine" but about "sustainability", he said.

Opening of International Design Fair in Milan
About 300,000 visitors from 160 countries are expected to participate in the Salone del Mobile ......