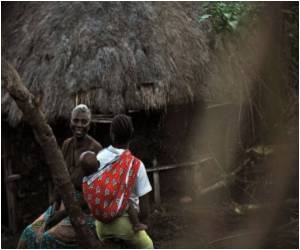 Fifteen years after her husband died, Ana Mwita, greying and wrinkled, ventured once more into matrimony, this time with a young woman as per an old tradition among Tanzania's Kurya people.

Living in northern Tanzania, the Kurya allow elderly women to "marry" young women to bear them children with a male relative so as to carry on the family name and also ensure they and their livestock are taken care of.

The older women are either widowed, childless or bore only daughters who married and moved away with their husbands, leaving them alone.

"My husband died more than 15 years ago, leaving me all alone without children while we had huge tracts of land and cattle.
Advertisement
"After 10 years of being a widow, I decided, in line with the tradition here, to remarry," said 65-year-old Mwita, holding a baby boy whose three-year-old sister ambled about the homestead of three mud-walled huts.

The childrens' father is Mwita's married nephew, whom she asked to "take care" of Johari. But the children are hers, according to the tradition.

Remarrying for older women, known as mkungus, is a costly affair by local standards, requiring them to pay a dowry, just as is customary with ordinary marriages.

Nine cows, several jars of traditional gin and bundles of blankets was the bride price for Johari, who is full of praise for her "husband".

"I am happy. I have what I need for me and my children and I have freedom," Johari said.

Such marriages, found in Tanzania only among the Kurya, are tolerated by the authorities although same-sex unions are theoretically illegal in the east African country which frowns on homosexuality.

It is the generous dowries paid by well-off mkungus that encourage hard-up parents to marry off their daughters in this fashion, although such unions tend to have a short lifespan.

Bibi Nyamwanga, who has gone through two failed marriages with younger women, fumes at modernity and young men from the city, blaming them for ruining her married life.

Repudiated by her husband who blamed her for not having children, Nyamwanga inherited swathes of land from her parents in a rare occurrence among the Kurya.

For around 300 dollars and nine cows, she remarried a young girl to help her till the vast piece of land.

"I gave her this hut where she lived with my nephews," she said, pointing to a small house in her compound.

"But one day she found a young man from the city and they left together in 2002," Nyamwanga said, her eyes welling with tears.

In compensation however, she was reimbursed all the dowry and settled once more with another young woman. Again, she was abandoned.

"I wasted my time, my money and cattle. It helped with nothing, nothing at all," lamented Nyamwanga.

For some of the young women, being married to a mkungu is shameful.

Farida Zacharia rues her life with elderly Bibi Salima, and blames her father for forcing her into the arrangement.

"It is him who took me to a mkungu," said Zacharia, referring to her father. "I have never seen such a nasty woman, a real shrew this Bibi Salima! She beat me at times and wanted to turn me into a man. If my mother was still alive, she would not have accepted that," Zacharia said.

Barely 19 years of age, Zacharia had already been married off to one mkungu, but abandoned the woman less than a year later and took to drugs and alcohol to hide her shame.

"I drank and smoked all manner of things," said Zacharia, who now works as a housemaid for a relatively well-off family and dreams of one day marrying a young man of her liking.

Woman-woman marriages have been documented in several dozen precolonial African societies. Today the practice is becoming rarer but is still found in some communities, notably in the Igboland region of southeastern Nigeria.