Who Would Have Thought That a Two-year-olds Cold was Actually Leukemia? 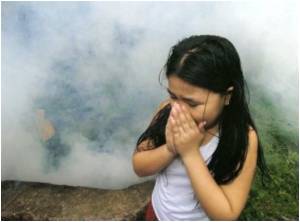 Two-year-old Jessica had a bad cold which just would not improve even after a few days.

A visit to the hospital and some antibiotics provided no relief. Her condition worsened and she stopped eating. She continued to sleep for 23 hours a day. Something was really wrong and Jessica needed urgent medical help.

Further investigations turned out to be life-altering for the family when they were given the diagnosis that their beautiful daughter was suffering from leukemia.

Acute myeloid Leukemia, more popularly known by its abbreviated form AML, is a fast- evolving leukemia that affects both children and adults alike
Advertisement
They were informed that Jessica suffered from acute lymphoblastic leukemia, a cancer of the white blood cells.

Mrs. Holmes said: 'It was just awful. It was even more upsetting than when my father died - and that's saying something. But I was so overwhelmed by the shock it felt like I had been switched off - I went completely numb and nothing was registering.

'Jessica is my first child and when she was born, I was ecstatic as she is all I ever wanted. When we found out she had leukemia, I went to pieces. But everybody has got behind us and without the support we have had, we would have cracked long ago. We just take each day at a time and try not to look too far ahead,' Jessica's parents said.

Chronic Lymphocytic Leukemia (CLL) is one of the most common types of adult leukemia and is considered as one of the 'good cancers'.
Advertisement
<< Violent Video Games Make Teens 'Eat More, Cheat More': Stud...
High-fat Diet Ups Breast Cancer Risk >>