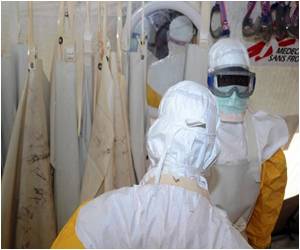 The World Health Organization said fifty-seven more deaths from the Ebola epidemic spreading alarm in west Africa have pushed the overall fatality toll from the outbreak to 729.

The deaths of 57 more people from Ebola in west Africa have pushed the overall fatality toll from the epidemic to 729, the World Health Organization said Thursday.

The 57 deaths were recorded between Thursday and Sunday last week in Guinea, Liberia, Nigeria and Sierra Leone, the UN health agency said in a statement.


It said 122 new cases were detected over those four days, taking the total number of confirmed and likely infected cases from the outbreak so far to 1,323.

Why is the deadly Ebola virus outbreak making the health experts hit the panic button? Find out from this quiz.
Advertisement
WHO said the trend in Guinea, Liberia and Sierra Leone "remains precarious with ongoing... transmission of infection".

Guinea is suffering the worst from the disease, which causes often fatal bleeding and has no vaccine. The country's authorities reported 20 more deaths apparently from Ebola in the last four days of last week, taking its national fatility figure to 339.

Nigeria, Africa's most populous country, reported its first death from Ebola in that period.

WHO said the medical sample taken from the patient who died in Nigeria shortly after arriving by air had still not been analysed by its regional lab because courier companies were refusing to transport it.

The UN agency added that it "does not recommend any travel or trade restrictions" be applied to Guinea, Liberia, Nigeria, or Sierra Leone at this time.

Authorities in southeast Nigeria have quarantined the body of man who died in Liberia as a precaution amid growing concern over Ebola.
Advertisement
<< Taking Contraceptive Pill Increases the Risk of Breast Canc...
Men are Biggest Liar: Study >>

WHO and CDC Come Out With Tips to Prevent Ebola Infection

The World Health Organization along with the US Centers for Disease Control and Prevention (CDC) has come up with a number of steps that people can use to protect themselves from infection.
Advertisement
News A-Z
A B C D E F G H I J K L M N O P Q R S T U V W X Y Z
What's New on Medindia

Find a Doctor Blood - Sugar Chart Diaphragmatic Hernia Accident and Trauma Care Noscaphene (Noscapine) Drug Interaction Checker Drug Side Effects Calculator Vent Forte (Theophylline) How to Reduce School Bag Weight - Simple Tips Loram (2 mg) (Lorazepam)
This site uses cookies to deliver our services. By using our site, you acknowledge that you have read and understand our Cookie Policy, Privacy Policy, and our Terms of Use