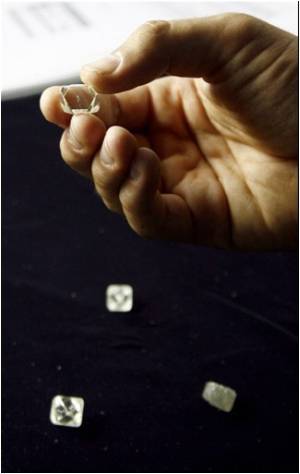 At a Hong Kong auction, a 118.28-carat white diamond broke a world record when it fetched more than $30 million.

The sparkling translucent stone was sold to a phone bidder at the Sotheby's auction for HK$238.68 million ($30.6 million) following bidding that lasted for more than six minutes.

The egg-shaped stone has been described as the finest of its kind ever to appear at auction. Earlier estimates valued it at $28-$35 million.


The stone, dubbed the "Magnificent Oval Diamond", was discovered in a deep mine in an undisclosed southern African country in 2011.

As a rough stone before being cut, it weighed 299 carats.
Advertisement
The stone, described by Sotheby's as "the largest D colour flawless diamond", has been given the highest quality rating awarded by the Gemological Institute of America.

The sale beat the record set at a diamond auction last year, when a 101.73-carat diamond was sold for $26.7 million.

Hong Kong has become a centre for jewellery auctions thanks to growing wealth in China and other parts of the region.

Nanodiamonds can Boost Effectiveness of a Common Leukemia Drug
A joint study has found that the delivery of a common leukemia drug to leukemic cells can be ......