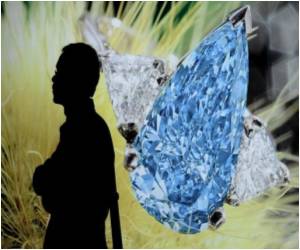 Auction house Sotheby's said that a 118.28-carat white diamond, set to break records, is to go under the hammer in Hong Kong in October.

Describing the egg-shaped gem as the "greatest" of its kind to ever appear at auction, the British firm said it could fetch $28 to $35 million in the auction, where another rare yet smaller diamond will also be sold.

"It's like [a] small chicken egg," a Hong Kong-based Sotheby's spokeswoman told AFP when she described its size.


Quek Chin Yeow, deputy chairman of Sotheby's Asia, said at a Monday preview in London that the D colour flawless gem would be the "greatest white diamond to be sold at auction".
Advertisement
The firm said the sale could beat previous records at a diamond auction last year, when a 101.73-carat diamond was sold at $26.7 million.

It was discovered in a deep mine in an undisclosed southern African country, where it weighed 299 carat as a rough stone.

A "Premier Blue Diamond" at 7.59-carat is also set to be auctioned off in October and could fetch up to $19 million.

Hong Kong has become a centre for jewellery auctions thanks to growing wealth in China and other parts of the region, as well as the region's increasing appetite for art.

Hong Kong to Host Auction of Rare Blue Diamond
October will see the auction of a rare round blue diamond in Hong Kong...

Move Over Gold and Diamond Facials, Bird Poop Facial Here to Stay
For all those who love fancy facials that promise to do wonders for the skin, there is another one ....

At US Auction Pink Diamond Sells for Nearly $40 Million
A new record for Christie's auction house was set by the sale of a 34.64-carat pink diamond has ......