Whipping May Not Help Win Race! 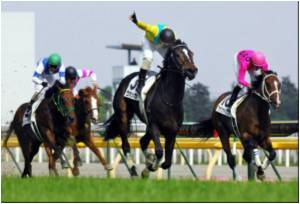 Whipping does not necessarily make a racehorse run faster, new research from two University of Sydney veterinarians has revealed.

The study, which has been peer-reviewed and published by the Public Library of Science, investigated the impact of whipping on performance in thoroughbred races.

Racehorse that recovered from Hendra virus killed in Australia, sparking demands inquiry into the affairs of the vet clinic where it all started.
Advertisement

Study co-author and Honorary Associate Professor at the Faculty of Veterinary Science, Dr David Evans, said the results offer no support for the retention of whipping in horse racing.


"We looked at running times in a series of races, how whips were used and whether that whip use influenced the outcome of a race," he said.

"What we found was that whipping did not affect the probability of whether or not a horse finished a race in the first three placings.
Advertisement
"How a horse ran in the first part of a race, when it wasn't being whipped, was the most critical factor in racing success. So horses are being whipped in the final stages of a race, in the face of muscle fatigue, for no benefit."

Animal behaviour expert and co-author Professor Paul McGreevy said he hoped this research would highlight the fallacy and futility of whipping.

"The reason for whip use has traditionally been the need to be seen to ride the horse out and the suggestion that you can steer a horse with the whip," he said.

"Many horse riders, and certainly these findings, refute that. Top performance horses have been bred and prepared to give their best.

"Add to that excellent horsemanship and you've got a winning combination. That's all you need.

"We have evidence here that great horsemanship does not involve flogging tired horses."

The research was funded by RSPCA Australia and carried out with the assistance of Racing New South Wales.

RSPCA Chief Scientist, Dr Bidda Jones, said the results will help end the debate over whether there is a place for whipping in the future of Australian Thoroughbred racing.

"This study has found that jockeys use whips just as people would expect - to try to make their slowing horse recover speed in the closing stages of a race in the hope they will get a place. That's not surprising. What is surprising is the finding that whipping doesn't make any difference.

"Jockeys may as well save their energy, keep their hands on the reins, and head straight for home. Their horses will be so much better off for it."

Dean of the Faculty of Veterinary Science at the University of Sydney, Professor Rosanne Taylor, said this report will challenge traditional thinking.

"Science has the ability to challenge our views of what is otherwise considered the norm," she said.

"This result is a good example of how evidence can inform the way we work with animals to promote their optimal performance and welfare.

"In this instance, the future wellbeing of Australian racehorses is looking brighter, because we now better understand that horses give their best when they are not whipped, before the 400m mark, positioning themselves for a win or place."