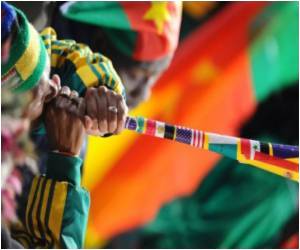 Vuvuzelas, the plastic horns that provided the soundtrack for the World Cup in South Africa, have blared their way into a dictionary containing the latest in the English language, published Thursday.

The deafening trumpets are one new entry in the latest edition of the Oxford Dictionary of English, which is based on how language is really used.

In South Africa, the focus on football is shifting to something as mundane as the African horn Vuvuzela
Advertisement

Their monotone drone could be heard throughout matches during the tournament, and came in for criticism from both players and spectators.


The new accolade for the horns, whose buzzing has been compared to a hornets' nest, came after "vuvuzela" was voted the word of the World Cup in a survey of global linguists last month.

Vuvuzela has been voted the word of the World Cup by global linguists who said on Monday the tournament will be best remembered for the name of South Africa's deafening trumpet.
Advertisement
It was chosen by 75 percent of more than 320 linguists from over 60 countries, who were asked to choose the word with the biggest impact on the tournament.

Vuvuzela was just one of more than 2,000 new entries in the third edition of the dictionary, which was first published in 1998.

The battle to deal with climate change provided carbon capture and storage, the process of trapping and storing carbon dioxide produced by burning fossil fuels.

The economic crisis also introduced new terms. These included toxic debt, debt which has a high risk of default, and quantitative easing, which is the introduction of new money into the national supply by a central bank.

India Greets the Blare of the Vuvuzela