Cholera Raises Its Head in Parts of the World: WHO 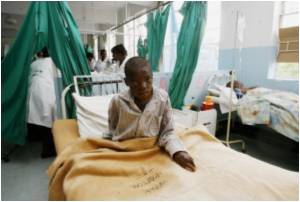 Cholera is surging again in parts of the world, a World Health Organisation expert said Thursday, pointing to epidemics in Nigeria and Cameroon.

Claire-Lise Chaignat, the coordinator of the WHO's group on cholera, noted the UN health agency has recorded 2,849 cases in Cameroon, including 222 deaths since May.

It has also recorded 837 cases of the disease in the north of Nigeria since mid-June, including 30 deaths.


"The fatality rates linked to cholera in these countries -- 3.6 percent in Nigeria and 7.8 percent in Cameroon -- are too high compared to the 1.0 percent threshold that is typically tolerated," she added.

Interactive section of Medindia gives details regarding waterborne disease
Advertisement
Earlier Thursday, Nigerian Health Minister Onyebuchi Chukwu announced a higher toll, saying that fatal cases have risen to 231 while 4,600 others have been infected.

The WHO expert noted that "globally, cholera is growing across the world" with outbreaks also recorded in the Democratic Republic of Congo's Sud-Kivu province, as well as in Laos, Uganda, Djibouti, Afghanistan, Nepal and Papau New Guinea.

"It's a disease of the poor, a sign of a lack of access to clean drinking water and of poor hygiene," Chaignat added.

"Cholera contrary to other illnesses can generate panic because the death can take place in several hours."

Cholera is transmitted by water but also by food that had been contaminated by unclean water.

It causes serious diarrhoea and vomiting, leading to dehydration. With a short incubation period, it can be fatal if not treated in time.

The disease is also endemic in some countries, such as Pakistan which has been ravaged by heavy flooding over the past month.

Chaignat claimed that the spread in cholera across the world could be partly linked to climate change.

The germ survives particularly in contaminated water of 37 to 38 degrees and without too much direct sunlight.

Around 120,000 people die every year from cholera, according to WHO estimates.

The cholera epidemic in Bauchi, Nigeria's northern state has claimed more casualties with the number rising from 47 to 67 in the past one week, health officials have stated.
Advertisement

An enzyme in cholera-causing bacteria uses a previously unknown mechanism in providing the bacteria with energy, scientists have found.
Advertisement

Amoebic dysentery or amoebiasis is an infection of the intestine that causes diarrhoea most frequently along ...

Cholera Raises Its Head in Parts of the World: WHO Personalised Printable Document (PDF)