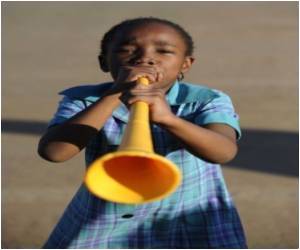 It's the sound of the recently-wrapped up World Cup. And seems like it won't be going away too soon.

The unofficial symbol of the 2010 Soccer World Cup, the "Vuvuzela", has been voted the word of the World Cup by global linguists who said on Monday the tournament will be best remembered for the name of South Africa's deafening trumpet.

The World Cup Vuvuzela horns were banned at Pamplona's bull run festival even as thousands of people thronged the streets to watch the San Fermin running of the bulls.
Advertisement

"Long after individual matches and goals are forgotten, this will be remembered as the Vuvuzela World Cup," News24 quoted Jurga Zilinskiene, managing director of London-based firm Today Translations, as saying.


"Vuvuzela" was chosen by 75 percent of more than 320 linguists from over 60 countries, who were asked to choose the word with the biggest impact on the tournament.

The tuneless plastic horn blown by fans was a top World Cup newsmaker and has been snapped up abroad.

Experts have warned it can damage hearing.

You Tube has added a vuvuzela button to its best clips.
Advertisement
<< Bangladesh Teen Girls Are Killed or Commit Suicide Because ...
Researchers Say 'Mixed' Practice Makes For Perfection >>

Vuvuzela is a Must in Italy

World Cup footballers and broadcasters may detest the drone of vuvuzela horns in South Africa, but Italians are flocking to snap up the plastic trumpets being given away free in the

Linguists Vote for the Sound of the World Cup: The 'Vuvuzela' Personalised Printable Document (PDF)